Betting on the Biggest Horse Races in the UK & Beyond

Despite being widely-known as a quintessential British pastime, horse racing is a hugely popular betting market that attracts a great number of punters from all around the globe. Millions of £’s are wagered every year as the top jockeys compete for big-money purses at some of the world’s most prestigious races. This page will act as a guide to the biggest horse races in the UK and the rest of the world, and give you a good idea of where the best place is to lay your stake. Scroll down to the sections below to gain an insight into the British Grand National, the Ascot Gold Cup, the Melbourne Cup and several more.

As can be seen in the table above, all the top betting sites for horse racing cater for the biggest horse races in the UK and provide good coverage of popular events from the other corners of the globe. There are many different types of horse race, however the two main types on which people mostly bet are known as jump races and flat races. They are run at different times of the year and require special breeds of horses with very specific physical attributes. For a complete guide to the world’s most popular races, as well as some useful guidelines on the different types of race, keep scrolling down to the sections below – odds price comparisons for the different types of races can be found over on the main page.

Jump Races (sometimes referred to as National Hunt races in the UK or simply jumps) are races where the horses must jump over varying obstacles. Jump races can be further categorised into steeplechases, where horses must jump over varying fence and ditch obstacles, and hurdle races, where the competitors must clear a series of hurdles at least three-and-a-half-feet high. Jump races normally take place in the Autumn, Winter and Spring in the UK – as the ground is softer, therefore making the jumps less dangerous – and the competing horses tend to be older geldings (horses that have been castrated). Jump races are classified as follows: Grade 1 races, Grade 2 races, Grade 3 races and then listed races. More detailed definitions of the racing grades can be found over on the our horse racing glossary page.

The Grand National first took place in 1839 and is now widely regarded as one of the biggest horse races in the world. It is a Grade 3 steeple chase run over 4 miles and 514 yards for horses aged over seven years with a rating of more than 120 or more from the British Horse Racing Authority. It is a handicapped race (the maximum weight of the competing horse must not exceed 11st 10lb) with a huge purse of £1 million, making it the richest European jump race. The Grand National is run at Aintree, a highly-ranked Jockey Club racecourse near Liverpool, and is one of the highest viewed and best attended races – figures show that Grand National betting generates around £200million for UK bookmakers every year.

The Cheltenham Gold Cup is another British Favourite. It is a Grade 1 National Hunt Race that features many of the best trained horses from across the British Isles. It is run over 3 miles and 2 ½ furlongs with horses aged over five years and takes place every year in March as part of the famous Cheltenham festival. Whilst the purse for the winner is not as sizeable as the Grand National, (the total purse was £575,000 in 2016) it remains the most valuable non-handicap jump race in the UK, and is one of the most eagerly anticipated races of the four-day-long festival at Cheltenham. Like the Grand National and other prominent racing festivals, Cheltenham betting generates considerable revenue for bookmakers every year.

The Champion Hurdle is another popular feature of the world-renowned Cheltenham Festival. It is a Grade 1 hurdle race run over a distance of 2 miles and 110 yards for horses aged four years and older. It is probably the UK’s most celebrated hurdle race, with a shared purse of £400,000 between the winners, and constitutes the third and final segment of the coveted Triple Crown of Hurdling – the Triple Crown is a prestigious trophy that is awarded to the winner of the Fighting Fifth Hurdle, the Christmas Hurdle and the Champion Hurdle.

The Hennessy Gold Cup is one of the younger jump races in the UK. It is a Grade 3, handicapped race for horses aged four years or older that takes place every year at the Newbury Racecourse in November or December. Despite offering a smaller purse than some of the other major National Hunt races in the UK, the Hennessy Gold Cup is a hugely popular betting market that generates an estimated £80million in wagers every year.

Simply put, flat races are races that do not include any hurdles. Distances range from 5 furlongs to 2 miles, with the shorter distances referred to as sprints, and the longer races referred to as “staying races”. Flat racing is the most common type of horse racing and is normally run on grass in the UK, although some races are run on artificial all weather turf, and sometimes dirt in North America and Asia. Flat races are a stern test of either speed or stamina for horse – or both for the middle-distance races – and require a significant amount of skill from the jockey who must be tactically aware as positioning and timing are key. The main four bands of flat racing are as follows: The Classics, reserved for three-year-olds and the most prestigious of all the flat races; Conditions races, or Class 1 races where the weight of the competing horse is determined beforehand (Class 1 races are then further divided into three groups ranging from 1-3); Class 1 listed races, which include handicaps; Classes 2-7, rated between 0 and 110, and maiden races for horses that have not previously won.

The St Leger Stakes is run at the Doncaster Racecourse every year during the month of September. It is a Group 1 race open to the three-year-old thoroughbred male and female horses, meaning that it features only the best trained race horses in the finest physical condition. It is run over 1-mile, 6 furlongs and 132 yards and is the third and final race in what constitutes the English Triple Crown. The St Leger Stakes is most famous for being the oldest of the five races that make up the five British Classics.

The Ascot Gold Cup is the UK’s most prestigious event for staying races. It was first run in 1807 and takes place every year at the world-famous Royal Ascot racecourse in June. It is one of the longer flat races, ran over 2 miles and 4 furlongs, and is restricted to horses aged four years and above. The total purse for the winners is around £400,000, however the amount of money wagered on the race each year is an estimated £180million. 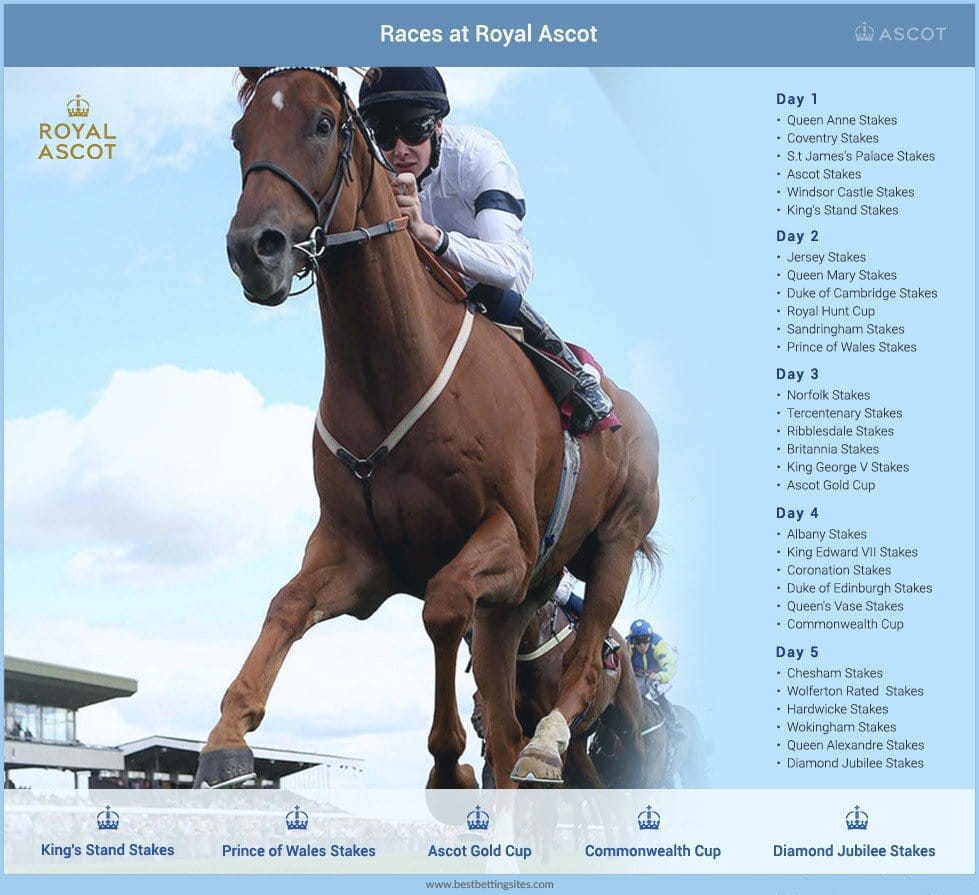 The Epsom Derby, sometimes shortened to The Derby, is regarded by many to be the greatest flat race in the world. As the world’s original horse racing derby, it’s the most prestigious of the five British Classic races and offers the biggest purse (£1.325million). It is run over 1mile and 4 furlongs at the Epsom Downs racecourse in Surrey, UK, and like all the Classics, is reserved for horses aged three years old – geldings are excluded in this case. Alongside the Grand National, the Cheltenham Gold Cup and the Ascot Gold Cup, the Epsom Derby is one of the cornerstones of British horse racing culture and attracts many millions of television viewers inside UK and worldwide.

Another British Classic, the 2,000 Guineas Stakes is run at The Rowley Mile Racecourse at Newmarket over a distance of exactly 1mile. Unlike most of the other classics it is run on a straight track without any curves or bends, meaning that it features many of the fastest sprinters known to the sport. The race has a total prize purse of £450,000 and is the first leg of the Triple Crown accolade.

The Biggest Horse Races in the World 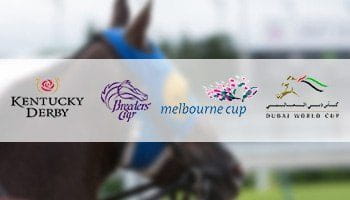 There are several high-profile, lucrative racing events outside the UK that garner a significant amount of worldwide interest. They may not have the same long heritage as say, the British Classics, however when it comes to betting revenue, there are some that are just as popular, if not more than many of the traditional British meetings. As a result, the best horse making betting sites ensure they offer full coverage of these meetings, as well as competitive odds prices. Keep reading below to discover some of the biggest horse races in the world.

The Melbourne Cup is the most prestigious, most widely-known thoroughbred flat race in Australia. It takes place every year at the Flemington Racecourse in Melbourne and is ran over a distance of 2 miles for horses aged three and above. It is a Group 1 handicapped race, meaning that the weights of the competing horses are determined according to their ability. Attracting huge crowds of over 100,000 people, the Melbourne Cup is one of the most eagerly anticipated spectators sporting events on the Australasian continent. Many come dressed in their finest, formal race day attire, while others opt for colourful fancy dress and fun costumes. The prize money for the winners is a whopping $6,200,000 AUS Dollars.

The Breeders Cup is a North American horse racing favourite, which much like the Melbourne Cup, can attract mammoth crowds of over 100,000 specators. It is an annual two-day event held in a different location every year where thirteen different races, varying between flat races and National Jumps, are staged. The biggest and most profitable is known as the Breeder’s Cup Classic. It is a Grade 1, dirt run race run over the distance of 1 mile and reserved for horses aged 3 years and older. Breeder’s cup betting generates millions of dollars every year; the purse for the race is $6million US Dollars.

The Kentucky Derby is the grand finale race in the annual two-week-long Kentucky Derby Festival. It is a Grade 1 dirt race for three-year-old colts and fillys that offers a sizeable $2million purse and boasts the highest attendance of all the races in the famous North American horse racing festivals. It’s run over a distance of 1¼ miles, with the record still set at 1.59 seconds by a famous horse named Secretariat back in 1979, who also became the first Triple Crown winner after a 25-year hiatus.

Held every year on the last Saturday in March, the Dubai World Cup is the Premier Race in the United Arab Emirates. It is the final, and most eagerly anticipated race in the famous Dubai World Cup Night of Races and is run, on dirt, over a distance of 2,000 metres. It is restricted to horses ages three and four with weight limits of 54.4 kg and 57kg respectively. The race receives significant airtime around the globe and offers a staggering purse amount $10million US Dollars, making it the world’s most lucrative horse race.