The craic is over for betting sponsors of Gaelic sports as the Gaelic Athletic Association (GAA) has voted to ban them across all of its competitions.

Including all indigenous Gaelic games such as hurling, camogie, Gaelic football, handball and rounders, the move to ban betting sponsors will have a strong impact on the betting industry’s stronghold in both Ireland and Northern Ireland. As Gaelic football is the most hotly participated sport across the entire island, this move could change the entire fabric of Irish society.

Passed last weekend at the GAA Annual Congress, the motion will ban ‘sponsorship by a betting company of any competition, team, playing gear or facility’. This felt like a long time coming for the GAA, who were under huge pressure to crack down on gambling within the sport, leading to 93% of delegates voting in favour of the motion.

This wasn’t the only motion proposed last weekend, with proposals to make it illegal for anyone who isn’t a paid member of a GAA club to manage or coach a team, and a shortening of the cut-off point for players looking to play in North America both roundly defeated. There is talk that the next motion to be debated is the influence of alcohol – also a major problem in Ireland – upon the moral fabric of the game.

One of the former stars of the game, the Galway Dual star Alan Kerins, has strongly welcomed the move, but states that it simply isn’t enough. As The Gaelic Players Association delegate stated in an interview with RTÉ sport:

The GAA is a very significant organisation socially and this is a big step, not only to protect the players but also the wider GAA community. They are taking a lead on it, both nationally and internationally on it while we support the motion and commend the GAA for a very progressive step, we still feel there’s an awful lot more to do. We help players at crisis point but we also want to introduce a lot more preventative measures, like life coaching.– Alan Kerins, former Galway Dual player

GAA president John Horan seconds this motion, stating that the betting problem in Ireland is reaching a crisis point:

It’s worse than an alcohol problem. An alcohol problem, people will fall down. A betting problem can wipe families out. It’s a societal thing in Ireland. It might be something in our genes, to be betting.– John Horan, GAA President

Further talk regarding tackling the problem could include banning half-time advertising and all in-game commentary regarding gambling odds. This is something that not only affects punters, but also players – with over 100 requesting GPA support for gambling issues since 2012. With more and more players coming out about their gambling problems once they have finished playing, it seems that the culture is slowly shifting in the country. It looks like the heyday of betting companies looming larger than life in the Irish imagination has finally run its course. 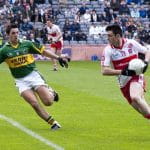