On Saturday the 26th of August 2017, when Floyd “Money” Mayweather Jr and Conor “The Notorious” McGregor come face to face in the ring at the T-Mobile Arena in Las Vegas, history will be made. For the first time in history a five division boxing champion will face off against a novice boxer who also happens to be a two time mixed martial arts champion. Yet this isn’t the only history being made.

Betfair have recently stated that the money staked on this fight so far has surpassed £10 million, therefore trumping the previous record of £8.9 million gambled on the 2015 fight between Mayweather and Manny Pacquiao.

Mayweather won unanimously on points, though the fight, which was negotiated and built up over a number of years, failed to live up to the sky high expectations the promoters touted. Many fans appear to think this fight will be much more epic, as the aforementioned £10 million mark being passed certainly illustrates. In fact, Betfair believe that when the bell rings and the anticipation is put into practise, the amount of money gambled on this fight could reach £100 million, absolutely smashing the previous record.

“We expect this fight to trade well over £50m and could even get to the £100m mark, which would be one of our biggest sporting events of all time.”

One catalyst for the gambling record being so incredibly trounced is the Betsafe campaign offering 49/1 odds on McGregor to defeat Mayweather Jr to all new customers. Betsafe recently appointed McGregor as an EU Ambassador and they have combined to create “Notorious Airways”. This exclusive private jet service will fly competition winners to arguably history’s most promoted fight and also allow them to get a taste of the McGregor lifestyle.

McGregor spoke of the partnership himself:

“Today I’m happy to announce that I’m partnering up with Betsafe. It is an honour for me to be an Ambassador for this great brand. Although real gamblers know the odds are stacked against them, we also know that passion overcomes the odds.”

As the fight looms larger on the horizon, many predict this record won’t be the only one to be smashed as this fight has the potential to be the most lucrative in history. The overall revenue is expected to reach £390 million through pay-per view purchases whilst tickets in the 20,000 capacity T-Mobile arena are trading hands from £18,000 to £30,000 for ringside seats and as much as £2,000 for upper tier seats. Throw in some decent binoculars and it’s a very costly evening for spectators furthest from the action.

It is predicted Mayweather will earn more than £150 million from this fight alone whilst the Irishman will take over £50 million. Mayweather’s hefty cheque looks set to take him to the top of the world’s highest paid athletes, which he last topped in 2015 thanks to his fight with Pacquiao. Mayweather earned $300 million in 2015 from a combination of his salary, winnings and endorsements according to Forbes with Pacquiao earning a rather more modest $160 million. If Mayweather earns anything close to that amount for this fight – which he is expected to – then he will eclipse the $93 million that Portugal and Real Madrid footballer Cristiano Ronaldo will earn in 2017. 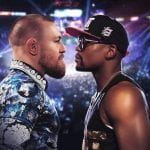