Having a bet on the footy was once a classic weekend tradition of the working classes. It acted as an opportunity to add extra excitement to the game of the masses by not only inducing sheer joy and ecstasy but also offering the opportunity for a night out at the pub with no holds barred or, if lady luck took a particular shine to you, a holiday with your better half to escape the boredom of life in the bus lane. 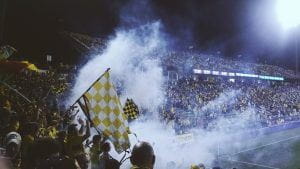 Supporter’s interests are being increasingly overlooked as clubs opt for commercial gain at all costs. ©Pexels

The fact these two mountains of industry go hand in hand is one of the factors as to why so many people have barely noticed how much of an influence betting has on the UK’s number one sport. One reason for this could be exemplified if you were to take a casual walk down the standard British high street twenty years ago and then do the same now. You would notice an abundance of pound shops and betting shops now compared to the past.

They have become a part of the lower classes landscape to the point that it doesn’t register in the brain until Saturday comes and it’s time to fuel those endorphins with a bet or two. Since the start of the month Ladbrokes Coral have announced the extension of their partnership with Middlesbrough football club, began a partnership deal with northeastern rivals Sunderland and announced new partnership deals with South Yorkshire rivals Sheffield Wednesday and Sheffield United respectively.

“We are delighted to embark on this partnership together as it’s a reflection of where Wednesday is heading as a brand itself”.

Palmer’s use of the word “brand” is subtle yet poignant. Referring to Wednesday as a brand rather than a club gives you an insight into how executives and people at boardroom level are starting to view the football fan. Not as a member of a footballing community but as a customer facilitating a brand. Charlton Athletic CEO Katrien Meire has been quoted of complaining to people at a tech summit in Dublin that:

“Fans don’t see themselves as customers”.

Meire’s is a more extreme view but still a frightening prospect and potential factor as to why Premier League and now Championship clubs are starting to alienate their supporters in search of cash.

When a football team is sponsored by a company it is saying that it not only approves of the business this company is doing but it thinks the job they are doing is so good that they want you, the supporter, to think of them when you next need to buy some new tyres, a new car, a holiday or have a bet. It would be naive to ignore the amount of money being thrown around these days by sponsorship deals, with Chevrolet currently topping the table in the UK for forking out £47 million to Manchester United to be plastered across their first team’s chest. Revenue is obviously a factor for a club when contemplating a new sponsor. However, the gulf between the revenue as a factor and the image of the club and the sponsor hand in hand shows that the team is putting their welfare ahead of the supporters by taking the ridiculous sums of money from companies in order to act as a marketing puppet and tell already brainwashed fans how wonderful these companies are.

Manchester United’s deal with Uber made earlier in 2017 is another example. Uber are a company steeped in controversy. From using their customer’s data, to blogging about their customers sexual conquests, to underpaying their staff, to former employee’s sexual harassment claims; to say Uber’s reputation is falling faster than Coventry City’s place in the football league is a drastic understatement. So for Manchester United to announce a partnership deal with them undermines their fans who are, apparently, their number one priority. Another point to be argued can be the amount of elite level teams across Europe using companies to make replica kits that have links to child labour, but this writer has neither the time nor the legal team to open up that can of worms. 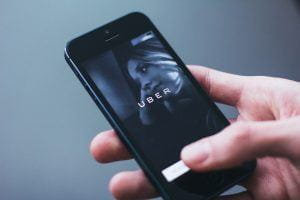 Manchester United announced they would be signing Uber as a commercial partner in January of this year. ©Pexels

Back to the betting industry. With these preceding deals having gone through, that means that twenty one of the forty four clubs in the top two tiers of English football are sponsored by betting companies for the 2017/18 season and every team in the top tier has at least one betting partner as of the 2015/16 season. Now, if we are to believe any of the plethora of betting adverts we encounter in between any kind of football match shown, then as long as you gamble responsibly having a flutter every now and again shouldn’t matter right? Right.

However, in these times of austerity and recession, escapism is becoming more and more popular. Findings from the industry regulator of the Gambling commission showed that British people lost a record £13.8 billion as of September 2016. The fourth worst culprit, claiming over £1.5 billion of the grand total, was betting on sports. So this is becoming a problem and not even Ray Winstone growling at the end of an advert that gives you live odds on Bolton Wanderers against Leeds United about how you should always gamble responsibly will change that.

These findings, as well as high profile betting charges against well known players including Joey Barton, has lead to the FA cutting all ties between the national team and betting companies along with a £4 million sponsorship deal with Ladbrokes in June. This shows a modicum of progress but the amount of teams sponsored by betting companies and therefore facilitating their use is increasing. Unless football clubs start treating themselves as what they are, clubs or communities, then fans will slowly start to lose interest.

The ultimate question regarding the at times bipolar relationship between fans and their clubs is how long will fans put up with seeing their welfare disregarded for the need for revenue. With the men and women in control of football clubs looking at things from an increasingly business based perspective, the donkey’s back must be close to breaking and when it does it’ll be tough for sponsors to fill the tens of thousands of empty seats at stadiums across the land. 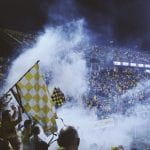