The Three Lions laboured performance against Iceland proved profitable for operators with many punters predicting a goal-fest. Tennis punters were also hit hard when the top-seed was sensationally disqualified when a ball hit in anger floored a line judge.

Looking at the odds pre-game for the Iceland v England clash, it’s not surprising that many punters backed a high-scoring game. A 5-0 England win was priced @ 7/1, with a 5-1 scoreline @ 10/1, with the Icelanders not given much of a chance of even scoring in the game. The reality, of course, the clash was a rather dull affair that didn’t come alive until the dying moments with two red cards and two penalties, one scored by England, the other missed by Iceland deep into injury time being the main talking points. A great result as England was heavily backed in the over 2.5 goals market with this 0-1 scoreline wiping out those bets. Had Iceland scored their late penalty to rescue the draw, the bookies would have been even happier of course, but still a good result for operators.

Anyone who backed Manchester United’s Mason Greenwood or Manchester City’s Phil Foden to become the top scorers in the Nations League will be cursing their luck after the pair were sent home in disgrace, following their debuts for England against Iceland. Celebrating the lacklustre victory, the duo invited an Icelandic model and her friend back to their hotel room, breaking strict rules that are in place by the England camp. An indiscretion that has not only cost them their England place but effectively ruined any bets on them. With Greenwood looking a natural goal scorer, it’s easy to imagine the 18-year-old may have had a few backers in that market.

An ill-advised action by sportsman is not just limited to football with tennis bettors cursing a moment of madness by Novak Djokovic. The top seed was playing Pablo Carreno Busta, and after losing serve to trail the Spaniard 6-5, Djokovic took a ball out of his pocket and hit it behind him in frustration. Unfortunately for the Serbian world number one, his hit in anger, hit a line judge in the throat, causing her to fall to the ground. A horrified Djokovic ran to assist the woman, his reactions showing it was totally accidental but under Grand Slam rules he was disqualified for ‘hitting a ball with negligent disregard of the consequences’. The 33-year-old loses all ranking points and forfeits all prize money he would have been due. For tennis betting fans it meant all bets placed on Djokovic in his fourth-round match were lost, as are all Djokovic to win the US Open outright bets.

Bookies, however, were lucky to avoid what perhaps was the greatest sporting bet placed since back when Leicester City won the Premier League. When aspiring footballer, Kieran Amos, bet the Sawbridge Town manager, he could lose 5st in weight during the lockdown. Before the pandemic, Amos tipped the scales at 21st 6 lb and was promised an opportunity to train with the Essex Senior League side if he could shed nearly a quarter of his body weight.

The 24-year-old revealed that he had struggled with his weight after breaking his ankle at 17 and this with a lifestyle that centred around nightclubs and kebabs, it seemed like a no-brainer bet for Sawbridgeworth manager Lee Mackman. However, trimming down to 14st 6lb, a remarkable feat in itself, was just the beginning for Amos whose new lean shape drastically improved his form and the defender not only trained with the club but became an unlikely goal-scoring hero.

Last week Sawbridge faced a tricky task in a FA Cup extra preliminary round against Romford who play in a higher league (Isthmian League Division One North). The game was at a stalemate, but the left-back found the back of the net in the 94th minute to give his side a dramatic victory and keep their FA Cup dreams alive. To show it was no fluke, Amos four days later, scored a hat-trick in Sawbridge’s first league game of the season, his three goals helping the side to a 5-2 victory against Southend Manor. A truly inspirational story, especially to those of us who have piled on the pounds during the lockdown. 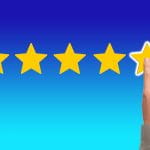