Shock Premier League results boosted returns for the bookmakers this week. Even the most optimistic Villians fan wouldn’t have predicted the scoreline at the Emirates. In the racing, a 73-1 shot won the Breeders’ Cup Mile

In the Premier League, it was the last round of fixtures before the players head off to international duty. As has been the pattern of this campaign, some surprise results boosted bookmaker’s returns. 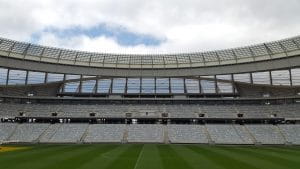 Aston Villa turn on the style in our betting week review © Pixabay.

In Friday’s early game, Burnley managed to double their points tally with a 0-0 draw against Brighton. As many fans have been boycotting the pay-per-view games, few likely witnessed the stalemate, and for the Premier League brand, that’s probably a good thing as action was thin on the ground. Brighton dominated the game but was unable to get past Nick Pope in Burnley’s goal. Burnley’s best chance was purely accidental; Matt Lowton’s attempted cross beat Mathew Ryan in the Brighton goal, but the crossbar saved the Australian’s blushes.

Saints go Top of the Premier League – Albeit Briefly

The later game between Southampton and Newcastle was far more entertaining, a 2-0 win for the home side put them on top of the Premier League table for the first time in their history. A goal by Che Adams with a well-taken volley in the 7th minute and Stuart Armstrong’s powerful strike in the 82nd minute wrapped up the points.

This result was good news for the bookmakers, with Danny Ings injured, who has been responsible for 36% of his team’s goals, many punters backed Newcastle to come away with a result here.

Although perhaps the real winner was Southampton’s social media team. After the final whistle at St Mary’s, they posted a picture of the league table with the caption, “stop the count”. A reference to the American presidential dispute over alleged voting fraud.

Saturday’s early game between Everton and Manchester United was also good news for the bookies for two reasons. Manchester United’s poor form lately had seen a surge of bets for their manager, Ole Gunnar Solskjær to be the next manager to be sacked in the Premier League. Therefore his team’s 3-1 win at Goodison Park against the former league leaders saved them a payout, for now at least.

The failure of Everton’s Dominic Calvert-Lewin to score was also beneficial for operators, the new England forward had scored eleven goals in eleven games and was well-backed in the goalscorers market.

The first major shock of the weekend came in the game between Crystal Palace and Leeds. Palace is not renowned as being prolific goalscorers, prior to this game, they averaged just one goal a game; therefore, the 4-1 thumping of Leeds surprised everyone. Despite the scoreline, the main talking point after the game was the goal scored by Leeds striker Patrick Bamford that was ruled out by VAR for offside. The striker’s armpit was adjudged to have been offside as he pointed to where he wanted the ball playing.

Many of the top bookmakers offer a promotion in which if a game finishes 0-0, punters who placed a correct score, half time/full time or scorecast bet will receive their stake back. This was a scenario that looked increasingly likely in Sunday’s early kickoff between West Bromwich Albion and Tottenham Hotspur.

Pre-match the vast majority of betting was on a comfortable win for Spurs, West Brom had secured just three points from seven games and had conceded 16 goals in that time, the worst record in the league. They faced the visit of Tottenham who has been scoring for fun, especially with players such as Harry Kane (six goals, eight assists) and Son Heung-Min (eight goals, two assists) in the side.

Despite this, with three minutes left on the clock, the scoreline remained 0-0.

However, a late lack of concentration from the West Brom defence allowed Kane to head home and spared the bookmakers refunding stakes. The low scoring nature of the game was also great news for bookmakers as most punters predicted over 2.5 goals.

Manchester City’s 1-1 draw with Liverpool was also good news for operators. Both teams were heavily backed for the win, and just like the Tottenham game, the low scoring nature of the game meant the over 2.5 market and above all produced losers.

Villa Stun Arsenal to Seal a Good Weekend for Bookies

The biggest surprise of the weekend and the most profitable for bookies was the late game on Sunday between Aston Villa and Arsenal.

Aston Villa’s season had seemed on a downward trajectory after a great start to the season, whereas the opposite was true for Arsenal who had beaten Manchester United in their previous game.

Despite the form indicating a win for the Gunners, a double from Arsenal fan Ollie Watkins, who had scored a hattrick in Villa’s 7-2 win against Liverpool, alongside an own goal by Bukayo Saka, consigned the London club to a heavy 3-0 defeat. Much to the delight of the bookmakers. Few punters would have backed this scoreline that was available @40/1 before the game.

Elsewhere in the racing, Order of Australia secured a shock win in the Breeders’ Cup. The horse won by a neck in front of Circus Maximus and was lightly backed @73/1. Lope Y Fernandez finished third in the race. William Hill’s Rupert Adams said: “Good weekend all round – a few big surprises from racing, including the Breeders’ Cup. The Liverpool versus Manchester City draw and Arsenal result both delivered for the coffers.”