Betting Week in Review: The Champions League threw up some interesting results with jaw-dropping defeats for Real Madrid and Barcelona. In the Premier League, draws were kind for bookmakers in the last action before the international break. 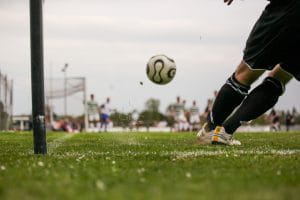 Champions League Features in Our Betting Week in Review © Pixabay.

One of the biggest shocks in Champions League history took place last Tuesday, with 13-time European champions Real Madrid losing at the Bernabeu 1-2 to Sheriff Tiraspol at incredible odds of 2349/100.

While Real Madrid are used to playing in the group stages, Moldovan champions Sheriff Tiraspol had to get there the hard way; the game against the Spanish giants was their 10th.

Jasurbek Yakhshiboev’s 25th-minute header had given the visitors the lead after an assist from da Silva Leite. However, a second-half penalty, scored by Karim Benzema in the 65th minute, levelled things up, and with a third of the game remaining, it seemed the quality of the Madrid team would prevail.

Yet the minnows of European football claimed a historic win, Sebastien Thill hitting a stunning strike in the final minute to send the travelling support wild.

It was a clinical performance, with Sheriff scoring from two of the three shots they had all game. Whereas Real was wasteful, having 31 shots, 11 of which were on target.

Spanish surprises in the Champions League were not limited to Tuesday, with another shock 24 hours later when Benfica added to Barcelona’s woes with a comprehensive 3-0 win over the five-time winners.

This result means Barcelona has lost their opening two games in a Champions League campaign and is firmly rooted to the bottom of Group E.

What will worry the club’s fans is the relative ease in which they were swept aside by the Portuguese team, the 3-0 scoreline the same scoreline they lost to Bayern Munich in the opening match. Thanks to a Darwin Nunez finish, it only took three minutes for the home side to take the lead. Ferreira Silva doubled the lead with 20 minutes remaining before Nunez ensured the three points, scoring his second of the game from the penalty spot.

The Spanish giants look a shadow of their former selves, registering only one shot on target all evening and had Eric Garcia sent off for a second booking with three minutes remaining.

Only one team in the history of the competition has progressed after conceding six goals in their first two games, Lyon, who reached the last 16 in 2007-08 and to cap off a terrible week for Barcelona, they also lost in the league, losing 2-0 to the Reigning champions Atletico Madrid.

A defeat made worse because former Barcelona star Luis Suárez scored the second after Thomas Lemar had opened the scoring. The defeat puts Barca in 9th, five points behind the leaders, bitter rivals Real Madrid.

We have mentioned many times in our weekly betting review about the dreaded Saturday early game, which has a knack of producing a surprise result which ruins many punter’s accumulators before they even begin. And true to form, this weekend was no different with a 1-1 draw between Manchester United & Everton in the 12:30 kick-off.

Knowing that Manchester United went into this fixture in third place and Everton in fourth, a draw sounds like a good result for both teams. However, with injuries forcing Everton to be without many of their stars, including their main goal threats Dominic Calvert-Lewin and Richarlison, the Red Devils with Christiano Ronaldo & co, at 27/50 were expected to see off the Toffees (581/100).

United started brightly in the opening ten minutes of the game, despite several of their big hitters being left on the bench after being involved in Champions League action on Wednesday night. Christiano Ronaldo scored a 95th-minute winner against Villarreal, and manager Ole Gunnar Solskjærdecided to rest the 36-year-old. Also on the bench was Jadon Sancho, Paul Pogba and Donny van de Beek.

Although United quickly faded after their bright start, they took the lead just before the break thanks to a well-taken goal by Anthony Martial, the Frenchman’s first goal since February.

Everton equalised twenty minutes after the break with a delightful team goal. The impressive Demarai Gray had too much speed and determination for Fred and Aaron Wan-Bissaka and led a breakaway from a United corner. The 25-year-old fed Abdoulaye Doucoure, who in turn passed to Andros Townsend, who finished past David de Gea in the United goal.

Everton thought they had grabbed a deserved winner late on when Yerry Mina tapped the ball into the net on 86 minutes. Tom Davies had a great chance to shoot but elected to square the ball to Mina, who converted. The referee gave the goal, but VAR intervened, correctly adjudging that Mina was offside.

While the draw priced at 327/100 was disappointing for both teams, it was a good result for operators as many expected a routine win for the home side and had backed them accordingly.

Brentford have enjoyed their time with the big boys, and the nearly promoted team have been the surprise package of the season so far, beating Arsenal 2-0 on the first day of the season and have only suffered defeat once in the seven games so far, a 1-0 loss to Brighton. In their last game, they played their part in a thrilling 3-3 draw with Liverpool.

The Arsenal and Liverpool games aside, the trip to West Ham was probably their toughest test yet, with the Hammer flying high and only suffering defeat once in a 2-1 loss against Manchester United.

The Bees got off to a great start; Sergi Canos’ attempt was blocked by West Ham’s goalkeeper Lukasz Fabianski, presenting a tap-in for Bryan Mbeumo after 20 minutes, a reward for a bright start by the visitors.

After the interval, it was the home side that piled on the pressure. Jarrod Bowen went close with a header and had another effort saved by Brentford keeper David Raya.

It was, however, third time lucky for Bowen, who finally found the equaliser with ten minutes left to play, and you’d have bet on the experienced heads of West Ham claiming the win.

However, the visitors claimed all three points when Yoane Wissa scored an added-time winner, taking the Bees to seventh in the table. A great result for the club and also for the bookmakers who had West Ham heavy favourites at 39/50. The draw was 137/50 with the Bees priced at 97/25.

Remarkably, Brentford was the only team in the Premier League who won away from home this weekend.

Honours Even Between Liverpool and City

Draws are good news for bookmakers, as the volume of bets on stalemates is much lower than those that forecast wins. Therefore the 2-2 draw in Sunday’s highly anticipated clash between Liverpool and Manchester City finished the weekend on a high for operators.

Neutrals also benefitted in an enthralling clash between two teams that are likely to be challenging for the title at the end of the season.

Champions City had the upper hand in the first half but could not turn their possession advantage into goals, and they were made to pay as Liverpool took the lead in the 59th minute. Mohamed Salah played in Sadio Mane, who finished clinically to give the home side the lead.

The lead lasted just ten minutes; the excellent Phil Fodden, who had several chances earlier, fired past Alisson with a powerful low shot from an assist from Gabriel Jesus.

Liverpool once again took the lead in the 76th minute, Salah scoring an excellent individual goal, taking on the City defence singlehandedly before unleashing an excellent shot that beat Ederson in the City goal.

It was a lead that lasted just five minutes.

Kevin De Bruyne, who had been guilty of some wayward shooting in the game, hit a powerful speculative effort that deflected off Joel Matip to find the net.

The draw was the fifth of the weekend, with the Manchester United v Everton draw, Burnley drew 0-0 with Norwich, Brighton and Arsenal were goalless, and Crystal Palace drew 2-2 with Leicester. 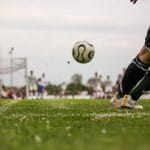