Last weekend, there was not a single draw in the Premier League. Normal service resumed this weekend which was great news for operators with many accumulators falling by the wayside. 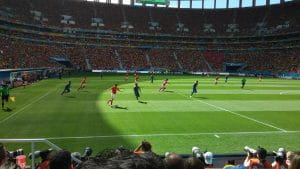 The Premier League Features in Our Betting Week Review © Pixabay.

Manchester United received plenty of plaudits for their second-half performance in last week’s 5-1 win over bitter rivals Leeds United. Therefore, it was no surprise to see the Red Devils installed as 63/100 odds on favourite to beat Southampton, priced at 443/100 at the weekend. Southampton finished in 15th place last season and suffered a heavy 3-1 defeat in their first game against Everton.

United needed to avoid defeat in the game to equal Arsenal’s record of 27-games without defeat on the road, which the Gunners set in their 2003-04 invincibles season. The 1-1 draw against the Saints ensured they achieved the feat, but it was far from a vintage performance and has seen the Red Devils drop points in the title race after just two games.

Ole Gunnar Solskjaer’s team started the game brightly, Anthony Martial having an effort cleared off the line by Southampton’s Mohammed Salisu. However, it was the home side who took the lead on the half-hour mark.

Bruno Fernandes, the hattrick hero of the game against Leeds, was caught in possession by Jack Stephens, and Che Adams shot took a deflection off United’s Fred, which gave David de Gea no chance. Solskjaer would later complain about the tackle on the Portuguese man, stating that the rules have gone from one extreme to the other and likened the new interpretation of the rules to rugby.

However, it was no surprise to see United trailing at the break. In the previous 26 games away from home, United often gave themselves a mountain to climb, and the last time the two teams met at St Mary’s, United were trailing 2-0 at halftime before a second-half fightback in a 2-3 win for the Reds.

It took United 10 minutes to level the scores; Mason Greenwood’s weak shot had enough power to beat Alex McCarthy in the Southampton goal. With momentum with United, the writing appeared to be on the wall for the Saints, especially when United’s big summer signing Jadon Sancho was introduced to the field, replacing the ineffective Anthony Martial.

Despite some clever interchanges from the United players, as the game wore on, it was a stubborn Southampton who looked more likely to score. Adam Armstrong, who was making his home debut, almost claimed all three points for the Saints. However, it took a stunning save from de Gea to deny the 24-year-old.

The draw, priced at 327/100, was great news for bookmakers. As the United game was on Sunday, the 1-1 took down many accumulators. The scoreline also meant a loss on over 2.5 goal bets, which many punters backed after the five goals scored in United’s first game.

United have a chance to break the record for consecutive unbeaten away games before the international break. Next Sunday, they play Wolves at their Molineux Stadium. Wolves have lost their opening two games, 1-0 away to Leicester and a 1-0 defeat at home to Tottenham. Southampton will be aiming to claim their first win of the season; they are in EFL action in midweek against Newport before a trip to St. James’ Park on Saturday to face Newcastle.

The most anticipated game at the weekend was the clash between London rivals Arsenal and Chelsea at the Emirates, which the blue visitors won 2-0.

Romelu Lukaku was making his second debut for Chelsea a decade after leaving. The striker spent three years at Stamford Bridge between 2011 and 2014, never making a start or scoring a goal in that time before moving to West Bromwich Albion, where he scored on his debut in a victory over Liverpool.

Chelsea paid £97.5m to bring Lukaku back to London, and it took just Lukaku just 15 minutes to start repaying that huge investment, scoring the opener with just his third touch in the game. The Belgian tapped home a close-range effort after a great ball across the face of the goal from Reece James.

After providing the opener, James got on the scoresheet 20 minutes later. Taking advantage of Arsenal’s man-marking of Lukaku, the English international finished clinically from the right-hand side of the box. Perhaps the only disappointing aspect for Chelsea fans was that they didn’t win by a bigger margin. Although Lukaku almost scored a second late on, Arsenal’s goalkeeper Bernd Leno saved brilliantly, pushing a goalbound header from the 28-year-old onto the crossbar.

Although we are, of course, just two games into the season, it’s hard to imagine Chelsea not being there or thereabouts come the end of the season. Lukaku is a huge upgrade on the striking options at Stamford Bridge. Timo Werner was brought in last season to score goals but was largely disappointing. The German scored six goals in the Premier League, almost half of his expected goals rate of 11.5. Lukaku was much more prolific, scoring 24 goals from an xG of 23.8.

For Arsenal, the problems mount. The 2-0 defeat by Brentford and this defeat by their London neighbours have left Mikel Arteta’s side in 19th position. The Gunners’ next game is away to champions Manchester City and a defeat in that game could see them bottom of the table going into the international break.

In other games, Liverpool moved to second in the table after goals from Diogo Jota and Sadio Mane gave them a routine win over Burnley. Manchester City hammered Norwich 5-0, Jack Grealish scoring his first goal since his £100m move from Aston Villa. Leeds took their first point of the season, drawing 2-2 in an exciting clash with Everton. Tottenham also kept their 100% run going; a penalty scored by Dele Ali was enough to give Spurs a win over Wolves. Harry Kane made his first appearance of the season, coming off the bench and was denied a comeback goal by an excellent save from Wolves keeper Jose Sa. 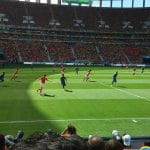