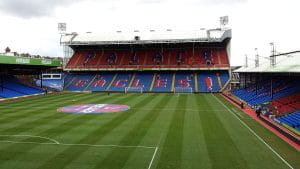 The adverts will be shown on pitchside banners and on screens at the stadium. © Wikipedia.

The scheme, initiated by GambleAware, will see both groups working together to produce adverts and other promotional materials aimed at raising awareness of the risks associated with gambling.

These adverts will be shown at Crystal Palace’s stadium, Selhurst Park, during matches taking place there and will be displayed on both the boards surrounding the perimeter of the pitch and electronic screens.

The messages will be visible for those watching at the stadium and viewers at home.

The adverts will be shown during the last three games of this 2017/18 Premier League season.

Along with raising awareness of gambling related risks, GambleAware hopes that other football clubs will do more towards achieving this goal and that more are made aware of the support and treatment the charity provides.

This is an important first step towards a deeper and broader action plan to address the ever-closer relationship between gambling and football. As the first professional football club to make this commitment, Crystal Palace is setting a great example to other clubs, and not only those with gambling sponsors because all benefit from the income that flows from television deals funded by the ever-growing amount of gambling advertising around live sport.– Marc Etches, chief executive at GambleAware

As a Premier League club, we recognise our responsibility of helping promote safe and responsible gambling. I’m pleased that Crystal Palace are the first club to form a partnership with GambleAware, and I hope we can play a part in raising awareness about their service, and help those individuals who need support.– Steve Parish, Crystal Palace chairman

Both groups have been quick to point out that the programme is aimed not just at fans and viewers, but footballers themselves too. Gambling amongst professional football players has hit the headlines a lot over recent months, especially after Joey Barton, who received a 13-month ban for betting on football, publicly stated that betting by players is rife and that almost half of footballers breach FA rules towards betting.