Manchester City’s hopes of completing a historic quadruple are in tatters as near neighbours Wigan Athletic produced one of the biggest shocks in the FA Cup since they beat City in the 2013 final. In a game of incident and high drama, the FA are likely to investigate several flashpoints.

Championship side Wigan caused the biggest upset of the FA Cup fifth round when they beat run-away Premier League winners Manchester City 1-0 at the DW Stadium. A win that destroyed Manchester City’s bid to become the first ever team to win the Premier League, the Carabao Cup (league cup), Champions League and FA Cup.

The geographical distance from Wigan’s DW stadium to Manchester City’s Etihad Stadium is only 27.6 miles but in football terms the two teams are on different planets with City boasting one of the most expensive squads ever amassed in football.

Before the game, you would have been lucky to achieve odds greater than 16/1 for City to achieve an unprecedented quadruple but Will Grigg’s goal in the 79th minute defeated a City side that had English international Fabian Delph sent-off in the first half for a foul on Wigan’s Max Power.

The sending off of Fabian Delph was a contentious one with the referee appearing to only be considering a yellow card until surrounded by Wigan Athletic players as the first half interval approached.

When the referee produced a red card instead of the expected yellow, this led to angry scenes from Manchester City players and culminated with a clash between City boss Pep Guardiola and Wigan’s manager Paul Cook in the tunnel at half time.

Part of the spat between Guardiola and Cook seemed to originate from the Wigan manager’s gesticulations when the tackle by Delph took place on Wigan’s Max Power. This would set the tone for a feisty second half.

Although it could be argued that the sending off was harsh, it didn’t really affect the dynamics of the game. City totally dominated and even with 10 men few would have bet against the phenomenally free scoring City being more than a match for Wigan in the second half.

It was however Wigan who scored the only goal of the game when Will Grigg cemented his legendary status with the Wigan faithful by scoring in the 79th minute.

For most of the game Grigg had cut a solitary figure, in fact he finished the game with less touches than any other player who started the game. But Wigan fans know the man who has scored 39 times in 101 appearances for Wigan doesn’t need many opportunities so when the rare chance came, he took it with both hands.

Wigan managed to withstand almost constant pressure but managed to hold on to repeat the same score line that saw them beat City in the 2013 FA Cup final. Many however would argue that this is an even greater achievement than that heroic feat in winning the cup due to Wigan now being a Championship side and made up of mainly free transfers.

What did mar an amazing game though was the crowd trouble at the end. City fans were upset about the manner of defeat and started throwing advertisement signs onto the pitch and Wigan fans staged a pitch invasion.

This pitch invasion led to a supporter verbally abusing City striker Sergio Aguero and an alleged spitting incident which saw the Argentinian throw a punch in the direction of the fan.

Whilst the FA have confirmed that after speaking to both City and Wigan officials that no further action will be taken against Aguero, both clubs are likely to face charges for not controlling their fans and the scenes at the end were a distraction from what was an enthralling game, one which City however, will be keen to forget. 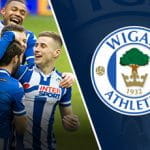