Video assistant replays under the spotlight

This year’s FA Cup has seen the use of video assistant referees for the first time. The introduction of this technology has divided opinion with some feeling it is just common sense and an evolutional step to embrace modern technology to make the game better. Others feel that mistakes are part and parcel of the game and it’s a case of some you win, and some you lose!

Any changes to the rules of football are always going to be put under the microscope. No matter how much they are tried and tested before implementation, the slightest flaw becomes back-page news for weeks. The use of video assistant referee (VAR) recently has given us an intriguing insight to the pros and cons and also the huge media attention the adaptation of VAR will bring, if or when it is introduced to the top tiers of football in England.

The best of VAR – offside without a doubt

If you need an example of when VAR can work best then the recent game between Leicester City and Fleetwood Town is a perfect example of how this technology can benefit the game.

Leicester City’s second goal, scored by Kelechi Iheanacho, was given off-side initially, but the referee referred to VAR for advice. In real-time it looked 100% offside, even after several replays at full-time, the off-side seemed the correct decision. After seeking advice from the video referee, Jonathan Moss overturned the decision and awarded the goal. It was marginal but the correct decision had been made. Even Michael Owen proclaimed the decision, “VAR at its best.”

Fast forward a couple of days and the world has changed!

The worst of VAR – It’s subjective

The above comments were made by Alan Shearer after Willian fell over Timm Klose’s outstretched leg inside the penalty area in the FA Cup replay between Chelsea and Norwich. The comments by Shearer indicate an injustice and a failure of VAR.

The trouble with the comment by Shearer is that it wasn’t a “clear and obvious penalty”. For everyone supporting the former England striker’s view there is an equal and just as vocal support that William dived, there is reasonable doubt involved. Ask fifty people to review the incident and it would be probable to have a split opinion on if it was a dive or a penalty.

It would be fitting to give Norwich manager Daniel Farke the last word in this article, his views and comments after the game will no doubt resonate with many fans when he said:

I don’t want to criticise the referees because they were on the other side to the incident and they were some really tough decisions to make. There are mistakes in football – players make them, managers make them, and referees make them. It is how it is.– Daniel Farke, Norwich manager

What refereeing decisions can VAR be used for? The first thing to remember is that it is at the referee’s discretion if VAR is to be used and the referee has the final say on the pitch. Even with this caveat, VAR can only be used in certain conditions, these are; decisions concerning the awarding of goals, penalty kicks, when a referee is considering issuing a straight red card and in cases of mistaken identity.

It is usually the referee who will request assistance with these decisions, however the referee may receive verbal notification of an incident by the video officials. The referee on the pitch always has the final say and there is no way of this being overruled. Even if the match official misses the incident, the match official has the option to accept or ignore the advice given.

Is England the first place that VAR has been used? No, the first experiments with using video assistants started in 2016 in Major League Soccer (MLS) involving two reserve teams, shortly after this it was used in an international between France and Italy. It wasn’t until November 2017 that VAR was used on British soil when it was used during the England friendly with Germany at Wembley Stadium. The technology is currently being tested in Serie A and the Bundesliga as well as 15 leagues worldwide.

Is VAR part of FIFA’s long-term plans for the future? It would certainly appear so. The governing body has long had to defend what sometimes seems the indefensible with regards to referee decisions. England fans will remember the 2010 World Cup game against Germany in the last 16 when Frank Lampard’s shot clearly crossed the line and whilst goal-line technology that was introduced in 2014 has helped eradicate those decisions, VAR decisions are not so black or white. Regardless of this, FIFA are reportedly looking to introduce this in the 2018 World Cup in Russia. However at time of writing, no firm decision has been made. 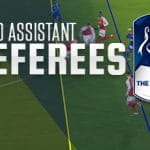