In December 2016, England were fined £35,000 for wearing and displaying poppies during the 2018 World Cup qualifier against Scotland on 11th November. Scotland were also fined £15,700 for the same offense, but they received a lower fine due to them being the visiting team.

Both England and Scotland defied FIFA’s rules on wearing political and religious statements, but they wore poppies in their Armistice Day clash at Wembley in full knowledge that they would be punished for this act.

Wales and Northern Ireland were also fined £11,700, even though their players didn’t wear the poppy, they did display a poppy wreath before kick-off.

FIFA reverting their decision to ban poppies has been called a “victory for common sense”.

Prime Minister Theresa May was one of many high-profile figures to publicly slam the football governing body for their classification of the poppy as a political symbol. In an impassioned speech during Prime Minister’s Questions, May said:

Before they start telling us what to do, they jolly well ought to sort their own house out. Our football players want to recognise and respect those who have given their lives for our safety and security – I think it is absolutely right they should be able to do so.– Theresa May, Prime Minister

FIFA’s decision to amend its rules has surprised many. It did appear that the English and Scottish Football Associations were going to be involved in a lengthy and costly court case to establish if the poppy could be classed as a political symbol. The nature of incremental punishment by FIFA for repeat offending meant the situation could get out of control very quickly.

And although FIFA are insisting this rule change clarifies rather than changes anything the draft proposal sent to its member nations, will allow the wearing of poppies on the condition that the opposing team and competition organiser agree to its use before the event.

Rather ironically, the next opponent for England should this rule change happen, is likely to be Germany. Although Germany have already stated that they have no objections to the English team wearing poppies.

If England and Germany avoid having to take part in a World Cup Qualifier play-off then the two shall meet for a friendly which will take place between 6th and 14th November, these dates include the Remembrance weekend.

This is a likely scenario as a win against Slovenia in October will see England through and Germany just need to draw against Northern Ireland to qualify for the biggest tournament in international football.

Is the poppy a political symbol?

The first Poppy Appeal was held the same year that The Royal British Legion was founded, in 1921. The red silk poppies were inspired by the classic First World War Poem In Flanders Fields and when the handmade poppies were first sold, they raised over £106,000 for the benefit of World War 1 veterans.

The poem was written by Colonel John McCrae, a Canadian doctor who was inspired by the poppies that he saw growing at a battlefield that claimed many lives.

The official Royal British Legion website states that the poppy is a symbol of Remembrance and hope that is worn by millions of people. They clearly state that a poppy is not a symbol of death or a sign of support for war, nor is it a reflection of politics or religion.

Originally the poppy was an icon for the First World War, but it has since been used to support and help British ex-service personal. Over 45 million poppies are distributed each year raising about £43 million for the charity.

Not everyone agrees that the poppy is non-political though. Lee Jones writing for online publication The Disorder of Things argues that FIFA were totally right to ban the poppy and gives the example of footballer James McLean. McLean refused to wear a poppy in 2012 while playing for Wigan and was subjected to abuse and even death-threats. On the Wigan Athletic website, they published a letter that James had sent Chairman Dave Whean to clarify the winger’s position on wearing a poppy:

I have complete respect for those who fought and died in both World Wars – many I know were Irish-born. I have been told that your own grandfather Paddy Whelan, from Tipperary, was one of those. I mourn their deaths like every other decent person and if the poppy was a symbol only for the lost souls of World War One and Two I would wear one; I want to make that 100 percent clear. You must understand this. But the poppy is used to remember victims of other conflicts since 1945 and this is where the problem starts for me. For people from the North of Ireland such as myself, and specifically those in Derry, scene of the 1972 Bloody Sunday massacre, the poppy has come to mean something very different.– James Mclean, West Bromwich Albion footballer

Are FIFA Opening a Pandora’s Box?

Listening to both sides of the story and trying to be impartial is proving difficult.

In 2014, just one week before the World Cup opened in Brazil, the Argentine National football team played a friendly with Slovenia and posed with a huge banner which said ‘Las Malvinas son Argentinas’ (‘The Falklands are Argentinian’). It wouldn’t take a PR guru to create a logo and campaign to claim legitimacy. How long before we see Spanish teams with Basque nationalism symbols to remember their fallen soldiers or a ‘free Gibraltar movement’?

One can also sympathise with James McLean’s point of view his right not to wear a poppy. Life is very rarely black and white and the irony is that if we dictate to people what they can or cannot do, that is the exact opposite to what our brave service people died fighting for.

What’s your thoughts? A sensible move in times of madness or the opening of a floodgate of problems? Share and comment, I’d love to hear your views. 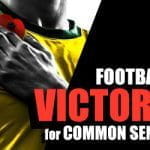