Two goals in three minutes sent Spurs crashing out of the Champions League at the hands of Italian club Juventus. The 2-1 defeat, which made the score 4-3 on aggregate, means Tottenham are the first British club to be knocked out of this year’s competition.

Juventus broke Tottenham’s hearts with two goals inside three minutes to secure a 2-1 victory over Spurs. As the first leg at the Allianz Stadium in Turin ended 2-2, this victory gave the Italians a 4-3 aggregate score line and ensured they went through to the last eight.

In that first leg, it was the Italians who were quickest off the blocks and looked unstoppable as they raced into a two-goal lead within ten minutes courtesy of two Gonzalo Higuaín goals. Tottenham fought back bravely and seemed to have the upper hand in the contest when Harry Kane pulled a goal back and Christian Eriksen levelled after 71 minutes. A very respectable draw in Italy and Tottenham would have home advantage for the second leg.

Juventus won the match 2-1 to go through 4-3 on aggregate.

Going into the second leg, Tottenham had every right to be confident. Already in the Champions League this season, they had beaten both Borussia Dortmund and reigning champions Real Madrid. The two away goals scored in Turin would have given the London team confidence.

That confidence would have grown even further when the excellent Heung-min Son gave the hosts the lead in the 39th minute. Tottenham should have been out of sight by then as they spurned chance after chance.

Despite Juventus having a strong shout for a penalty in the 18th minute they were pretty ineffective. Even when Gonzalo Higuain equalised in the 64th minute, the momentum and score line were on Tottenham’s side.

This changed a couple of minutes later when goal-scorer Higuain fed Dybala through the centre. The Argentine managed to stay onside and beat Hugo Lloris to vault Juventus into the lead.

Tottenham had two chances to equalise. Son came within inches in the 83rd minute but the one that will stick in the minds of Spurs fans will have been Harry Kane’s effort in the 90th minute. His header into the ground bounced off the far post and rolled agonisingly across the goal line before Andrea Barzagli cleared it to safety.

Tottenham had huffed and puffed but it is the Italians that go into the draw for the quarter-finals.

After the match, Tottenham manager Mauricio Pochettino said he still believes in his team and refused to place the blame of the defeat onto his players. Speaking after the final whistle he was prickly when asked if the performance was a nightmare. He said:

A nightmare? Why? That is football, I am still a dreamer. Of course, I am disappointed, when you compete in the Champions League and against this type of club, you can win or you can lose. We lost but in the way that we lost, I am happy. For me football is not a nightmare. You can win or lose. We respect our idea and we play football and we created a lot of chances but it wasn’t enough to win the game. That is all.– Mauricio Pochettino, Tottenham manager

Tottenham still have a chance of silverware, they play Swansea away a week on Saturday. No-one can deny the amazing talent that Pochettino has at his disposal at Tottenham with players such as Son, Deli Alli and Harry Kane all being fantastic, but you question how long Tottenham will keep hold of their stars if they don’t win a major honour soon. 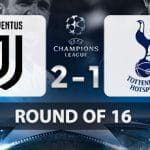