Tiger Roll won the 2018 Grand National by a head in a thrilling photo finish at Aintree. The 10/1 shot had surged ahead in the race but tired in the home straight allowing Pleasant Company to challenge for the line.

38-year-old Davy Russell was the oldest jockey and was also riding the smallest horse in the race. Yet this strange combination worked as Russell used every ounce of his experience to hold off a spirited challenge by 25-1 shot Pleasant Company to win the Grand National by the finest margin in many years.

This was Russell’s 14th time at the National and he was riding the highly-fancied Tiger Roll. The eight-year-old horse had astounding Cheltenham festivals over recent years, winning the Triumph Hurdle, National Hunt Chase and Cross-Country races and looked to be on course for a comfortable win. With just a furlong left in the race, Tiger Roll was leading by six lengths.

Aintree is famous for the long straight at the finish and the long run-in has been the downfall for many a horse over the years and this nearly proved the case this year at Aintree.

Pleasant Company found reserves of stamina in the straight, just as Tiger Roll was struggling for pace and at the line it took a photo finish to separate the two horses. If the track had been even 6 foot longer, Pleasant Company ridden by David Mullins would have won, such were the fine margins, but Tiger Roll managed to hold on at the death, giving victory to Davy Russell and trainer Gordon Elliott.

It was one of the closest finishes ever as Tiger Roll narrowly holds off Pleasant Company in a photo finish.

Tiger Roll is owned by Ryanair tycoon Michael O’Leary who himself is no stranger to winning the National. Two years ago, Rule the World won the Grand National. The 33/1 shot that day was ridden by David Mullins.

It wasn’t just Irishman Michael O’Leary who was celebrating on the day, as the luck of the Irish was prominently on show at the 171st Grand National. Representatives of The Emerald Isle remarkably scooped the top four places in the world’s most prestigious steeplechase.

13-year-old Bless the Wings, who is a stable companion for Tiger Roll finished 11 lengths off the pace and Anibale Fly, trained by A J Martin claimed fourth by a neck over Milansbar to give the Irish a 1-2-3-4 in the race.

Victory at the Grand National has provided some welcome good news for Davy Russell who has had a turbulent few months. His Mother recently passed away shortly before the Cheltenham festival. Recalling the influence she played in his life he said:

She was always there throughout my career. She was a very kind woman – I never heard her curse. She was such a lady and a role model. It’s a pity she’s not here.– Davy Russel, Jockey

Russell also stated that after the race, his first thoughts when crossing the line were for fellow jockey Pat Smullen. Smullen is a leading Irish Flat jockey who was recently diagnosed with cancer and Russell was quick to dedicate his Aintree win to his colleague.

Russell also revealed that once the race was finished he was more concerned about not missing his flight back as he had a race the next day. His Ryanair flight was delayed by 10 minutes because of him but customers probably won’t have complained as Ryanair boss Michael O’Leary had promised everyone on the flight a drink.

Russell did make it in time for the race the next day and won it. The prize money of €8,624 may have been a great deal less than the National’s €576,714 but Russell won’t care. A win is a win after all. 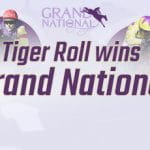