The sporting world is united in wishing former Manchester United and Aberdeen manager Sir Alex Ferguson a swift and full recovery from a brain haemorrhage which he suffered at the weekend. Former players, football legends and stars from sport in general have sent prayers and wishes for the 76-year-old.

The shocking news that Sir Alex Ferguson received emergency surgery on Saturday for a brain haemorrhage has led to a flood of support for Britain’s most successful manager. A Manchester United spokesman said the operation had gone very well but added that the Scot “needs a period of intensive care to optimise his recovery”.

Ferguson was last seen in public at Manchester United’s 2-1 victory against Arsenal when he presented Arsène Wenger with a commemorative vase to mark the Frenchman’s impending departure from Arsenal, something Wenger called classy.

Alex Ferguson is Britain’s most successful manager and has received words of support globally as he recovers from a brain haemorrhage.

It is reported that Sir Alex started to feel unwell last Thursday and at 9am on Saturday morning he collapsed and was rushed to Macclesfield district hospital before being transferred to Salford Royal.

Initial reports on Ferguson’s condition and prospects of a full recovery were not promising.

Such fears seem to have been alleviated somewhat with the news that Ferguson has awoken from the induced coma and has spoken to family and friends. There has been no official announcement from family but the Daily Mail reported that the 76-year-old is awake and talking.

The next two weeks are thought to be pivotal to Ferguson making a full recovery. One ex-player who has backed his former manager to battle all the way is Ryan Giggs. Giggs made his Manchester United debut at the age of 17 and paid tribute to Ferguson’s spirit. He said:

I know the operation has been a success – but he is a fighter and that is what makes me think that he will be able to make a recovery.– Ryan Giggs, former Manchester United footballer

Another former player who was quick to offer his thoughts and support was Michael Carrick. The veteran midfielder was signed by Ferguson from Tottenham for £18 million in 2006 said:

It was a tough night on Saturday and we were waiting for some positive news. We were all praying for him and thinking of him, Cathy and the family. It’s a tough time for everyone but I’m thinking positive and hoping he will pull through.– Michael Carrick, Manchester United footballer

Ferguson is easily the most successful manager ever in the history of the British game. In his time at Manchester United he collected thirteen Premier League titles, two Champions League trophies, five FA Cups as well as the League Cup on four occasions. But it is often forgotten that before he left his native Scotland, he performed miracles at Aberdeen, breaking the Glasgow stranglehold.

Unsurprisingly, tributes from north of the border have flooded in. Aberdeen manager Derek McInnes used his press conference to pay homage to Ferguson.

Ferguson was a divisive figure as a manager, especially with fans of rival clubs. However the sight of Manchester City fans holding a banner saying “football aside, get well Fergie” on the pitch during their championship celebrations was a classy gesture and shows the respect that Sir Alex Ferguson commands throughout the footballing world. 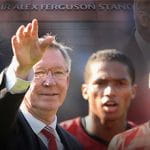