Former world number one Serena Williams was unable to claim victory in her first competitive game in a year. The 36-year-old American has been absent from the sport due to pregnancy and the birth of her daughter.

Serena Williams took part in competitive action for the first time since returning from maternity leave to take part in Sunday’s Fed Cup tie against the Netherlands in Asheville, North Carolina. Serena teamed up with Venus Williams as the siblings attempted to retain the Fed Cup for the USA.

Understandably Serena looked rusty on her return to competitive action and despite showing glimpses of her former self she was unable to make her return a triumphant one, losing 6-2 6-3 to Demi Schuurs and Lesley Kerkhove.

Serena Williams makes a return to competitive tennis by playing in the Fed Cup doubles tournament.

The defeat in this match matters little, as the US team had already secured the tournament win so this was an ideal low-pressure time for Serena to play and the sight of Serena back on the court will be all that matters for her huge following of fans.

The 23-time grand slam winner suffered badly during her pregnancy, in which she spent six weeks being bedridden after complications which included a pulmonary embolism and her daughter was born after an emergency caesarean section.

This led to many in the sport fearing that the sight of Serena on the court would be confined to TV replays, but Williams has proved time and again that it would be foolish to write her off. In William’s absence, there wasn’t an heir-apparent who stood up to the plate. Instead, the winners of the majors were Garbine Muguruza, Jelena Ostapenko and Sloane Stephens and in the first Grand Slam of this year, none of them could even get to the fourth round. It would appear then that the ‘new Serena is not out there just yet.

This match was just a small step and is likely to be the first of many in the journey back to full strength and a possible surge up the rankings. Serena had originally planned to participate in the Australian Open, but said that she needed more time to prepare:

My coach and team always said, ‘Only go to tournaments when you are prepared to go all the way’. I can compete – but I don’t want to just compete, I want to do far better than that and to do so, I will need a little more time. With that being said, and even though I am disappointed about it, I’ve decided not to compete in the Australian Open this year. – Serena Williams, Tennis player.

This may have been the case this time, in what boiled down to almost an exhibition match, but it’s easy with Serena to suspect that she will have a totally different attitude when it comes down to the tennis legend in her next grand slam event. Even at 36 years of age, there is likely to be a chapter or two left in the Serena Williams story. 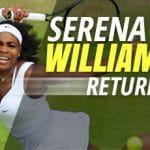