England were on the verge of a humiliating batting collapse before a spirited fightback led by Sam Curran in the 4th Test against India. Recovering from 86-6, England finished the first day on 246.

England needed the heroics of Sam Curran in the first day of action at the Ageas Bowl in Southampton.

Curran, who has only played in four Test matches for England, hit a heroic 78 to give the score line a degree of respectability and England a chance of sealing the five Test series, a series they lead 2-1.

An England victory looked unlikely early on with the England openers offering little resistance against the Indian bowlers. Cook was caught by Kohli after a Pandya delivery for 17. Jennings was out for a duck in strange circumstances, playing no shot at an inswinger that would have hit middle and leg. Jennings’ dismissal was quickly followed by Root for just 4, given LBW bowled by Sharma.

When Bairstow was caught by Pant on just 6 after a Bumrah delivery, England looked like they may struggle to even score a century.

The highly influential Ben Stokes who was back in the England fold after being cleared of affray started brightly, albeit conservative by his standards. He attempted to impose himself into the game but he too went cheaply for 23, given LBW after 102 minutes at the crease.

England’s nervousness was emphasised by the slow run rate. The 10% of deliveries attacked was the lowest figure from an England team in a Test match series for over five years.

With England seemingly down and out it was time for Curran to step up. The youngster played with youthful abandonment and looked confident and assured. He shared partnerships of 81 with Moeen Ali, who scored 40, and Stuart Broad w,ho battled to a credible 63.

A lot of the batsmen got some very good balls. It’s a team game so we worry about the end result, and we managed to get 246, which from 86-6 looks a decent score. It’s a massive positive for us going into tomorrow with a bit of momentum.– Sam Curran, English batsman

Regular followers of Test cricket will not be surprised by the emergence of Curran. England were in a similar situation in the first Test. With the team struggling on 87-7, his 63 runs made the difference as the youngster claimed his maiden Test 50. England recovered to win by just 31 runs.

Surprisingly, Curran was left out of the third Test at Trent Bridge with the experience of Chris Woakes and Ben Stokes preferred to Curran. It was only an injury to Woakes that gave Curran a chance to impress. He took the chance with both hands, becoming the last man and finishing the first innings with a score of 78, helping England to a score of 246. This is a modest score for a Test game and places pressure on the England bowlers.

With England all-out there was time for four more overs. India, with openers Dhawan and Rahul, finished the day on 19, 227 runs behind England with 10 wickets remaining. 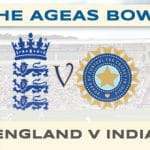