Former England manager Sam Allardyce has been named as the new manager of Everton. Allardyce takes over from Ronald Koeman and will be expected to improve the form of the Merseyside club which has seen them flirt dangerously with the relegation zone.

Everton’s protracted search for a new boss is over with former England manager Sam Allardyce taking over the reins at the Goodison Park club. Five weeks ago, Everton sacked Ronald Koeman and installed former Everton defender David Unsworth as caretaker manager whilst the club found a replacement. Unsworth will now return to his previous role with the under-23 team.

The appointment of Allardyce was all but announced when he was pictured at Everton’s 4-0 win at home to West Ham on Wednesday night.

The former England manager was photographed with Everton owner Farhad Moshiri at Goodison Park before the game and media reports suggest that Allardyce had agreed a deal with Moshiri before kick-off.

Before the game, Everton were sitting in 17th place in the Premier League. Former blue, David Unsworth, had been in temporary charge but a run of five defeats in his first seven games saw the Merseyside team just two points from the drop-zone. Despite winning the league with the under-23’s, Unsworth was unable topos replicate this form with the senior team.

Allardyce – The safe pair of hands?

Allardyce is certainly well travelled having previously had Premier League experience with Bolton Wanderers, Newcastle United, Blackburn Rovers, West Ham United and Sunderland. This gives Sam the unique title of managing the most Premier League clubs. Experience he has in abundance and whilst Everton fans may be disappointed by the lack of naming a next level manager, there is no-doubt that most fans will be happy if Sam’s appointment gives them a boost that could help them arrest the recent poor form.

He has a win percentage of 33.8% as manager whilst in the Premier League and can also boast that none of his teams have ever been relegated from the top division. So, in many ways the appointment of Big Sam is a sensible if somewhat uninspiring marriage.

Everton started the season with huge expectations after former manager Koeman was bankrolled to the tune of £142 million. Gylfi Sigurdsson became the Toffees record signing at £44.46 million but was also accompanied by Michael Keane (£25.65m), Jordan Pickford (£25.65m), Davy Klaassen (£24.30m), Nikola Vlasic (£9.72m), Henry Onyekuru (£7.20m) and Sandro Ramírez (£5.40m). However results have been poor and a managerial change was deemed necessary.

Allardyce said when he left Crystal Palace last year that he had “no ambitions to take another job“. He stated he wanted family time and was keen to avoid the pressure that comes with being a Premier League manager. At the time Allardyce said:

I simply want to be able to enjoy all the things you cannot really enjoy with the 24/7 demands of managing any football club, let alone one in the Premier League.– Sam Allardyce, Everton manager

It’s hard to believe that Sam Allardyce was Everton’s first choice. As he has been out of the sport since last season, Everton’s five-week delay doesn’t make sense if he was the main contender, in that time results have taken a turn for the worse. Recent poor form has probably forced Everton’s hand.

For Allardyce’s part, if the football gossip columns are to be believed, money could be a major motivator in ending his self-imposed hiatus, Allardyce will pocket £6 million-a-year whilst at Goodison Park. Elevating him above the likes of Real Madrid’s Zinedine Zidane, PSG boss Unai Emery and Atletico Madrid’s Diego Simeone. 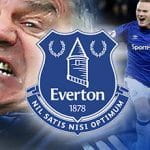