Russia have topped the medal table at the European Championships held in Glasgow and Berlin, with Great Britain and Ireland finishing runners-up.

The competition ended with a bang on Sunday night with Chijindu Ujah, Zharnel Hughes, Adam Gemili and Harry Aiknes-Aryeetey taking gold in the men’s 4x100m race. Britain also took gold in the woman’s 4x100m, with Dina Asher-Smith winning her third gold of the tournament in that race.

Russia won the overall standings thanks largely to a dominating showing in the pool. Russia earned eight medals less than Britain, but with 31 golds, they were the overall winners.

In cycling, Britain won two more medals than at the last European Championship in 2016, but performed perhaps worse than expected in the sprints. Laura Kenny took gold in the team pursuit and elimination races.

In swimming, Adam Peaty also earned two more medals than last time out. Peaty was in the mixed relay team that won gold, but the focus was on fantastic showing from 17-year old Freya Anderson. The World junior champion earned her first senior gold and looks set to earn many more in the future. In all, British swimmers took an impressive 22 medals.

Dominick Cunningham won gold in the floor, while Jack Laugher took gold in the one metre springboard diving event. That victory followed a synchronised 10m platform gold medal from Lois Toulson and Eden Change, who is just 15-years old. The pair were competing in just their second competition together and shot up from 5th position to claim gold with their final two dives.

Britain also took gold and silver in the men’s BMX, thanks to Kyle Evans and Kye Whyte, with the pair beating the favourite, France’s Sylvain Andre.

The event in Glasgow and Berlin – the first of a new multi-sport competition – will be hailed as a success and is sure to be recreated in 2022.

New European champions were crowned in a number of events, while a new sport entered the European Championships for the first time – the team golf event. Players from 15 different countries participated, while Britain took bronze in the women’s event. 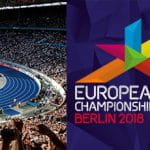