Roger Federer cemented his position as one of the greatest players ever to grace the sport. In winning the Australian Open for a sixth time, he also became only the fourth person behind Margaret Court, Serena Williams and Steffi Graf and the first male to win 20 or more major singles titles.

The win means that Federer has won three of the last five major honours available in the men’s game.

Čilić was a potential banana skin heading into the final with Federer. The 29-year-old had been in great form in the run up to the prestigious Australian Open final. A quarter-final win over Nadal had given the young pretender hope of victory in this showdown, but it was a nightmare start for the Croat.

In the first four games, Čilić managed a paltry four points as the Swiss tested his resolve with consecutive aces and raced into a one-set lead after only 25 minutes.

If anyone doubted Federer’s passion at the age of 36, these doubts were soon extinguished in the second set when a passionate Federer could be heard yelling “come on” as he survived two break points in the second set.

The Croatian will no doubt be disappointed with the one-sided look of the score line as the 29-year-old did play some great tennis but it was the consistency of the elder statesmen that saw him overcome an opponent who has won 17 ATP singles titles in his career.

At 36 years and 173 days, Roger became the second oldest man ever to win a grand slam singles title but the man himself was quick to play down his chances of catching Margaret Court on the all-time list Grand Slam with 24 wins, saying:

I don’t think so. I didn’t think 20 was ever possible. I think it’s too far. I never thought about it to be honest but those numbers are surreal and they’re amazing. I’m very happy if it stays at 20… I’m just very excited that I have nothing going on in the next couple of weeks. It’s all quiet so I can just take time to celebrate. Number 20 is super special so we’ll try to make the most of it. It’s one of the great moments in my career.– Roger Federer, Tennis player

The next generation of tennis?

Federer winning his latest title has meant that this is the thirteenth men’s grand-slam tournament in a row that has been won without a first-time winner. This is the longest sequence since 1911 and has raised the question for many observers about who exactly will form the next generation of superstars to take the sport forward.

There can be little doubt that Rafael Nadal and Roger Federer are currently hogging the limelight but at 31 and 36 respectively you can understand the sport looking towards the next torchbearer. Andy Murray has slipped to 20th and is still recovering from an injury so it would be more understandable for Andy to be involved in coaching long-term.

So many eyes are turning towards the German, Alexander Zverev. At just 20 years old, Zverev has many observers declaring him the heir apparent to Federer’s crown. The chances are that Nadal and Čilić would fill the void short-term should Federer decide to call time on his career but world ranked number 4 Zverev could be one to watch for the future. 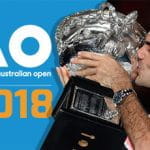