Veterans Roger Federer and Serena Williams progress in US Open

Roger Federer brought the US Open crowd to its feet as he outclassed his opponent, Nick Kyrgios, with a great tennis display at Flushing Meadows, New York. The five-time US Open champion cruised into the fourth round with a 6-4, 6-1, 7-5 win in a match that lasted one hour 44 minutes.

The 37-year old stood up to the early pressure from the young Australian, saving four break points in a seven game first set to secure the first set.

The twenty-time Grand Slam champion had many moments of brilliance in the match as he tries to win a sixth US Open. His last victory was 10 years ago in the 2008 edition of the tournament. Federer was back in competitive action following the break he took after losing in the Wimbledon quarterfinals. He came back looking refreshed and energetic as he faced his much younger compatriot.

Roger Federer at the US Open

Federer’s style of play was threatened early on as his serve game was not fruitful against an erratic Kyrgios, who examined him consistently. The youngster only dropped one point in his first three service games.

Kyrgios fired a lot of aces throughout the match but it was his inexperience in a competitive situation that was evident, as he let a 40-0 lead go with two unforced errors, wasting three break points and another in deuce. The youngster couldn’t see off sets, while Federer had enough experience and spirit to complete the match with brilliant winners. This proved to be the major difference between the two players in the game.

The moment of the match was undoubtedly when Federer hit an incredible tweener (a shot played between the legs). This brought the crowd to their feet and left his opponent open-mouthed and applauding at this display of tennis genius. For Federer to produce such a stunning shot is nothing new. He produced the same shot against Novak Djokovic in the US Open 2009, and also against Andy Roddick in Basel in 2002.

The 23-year-old Kyrgios only had positive words for his opponent after the match, saying the match was almost unreal with moments of magic. The win books Federer a place in the last sixteen for the 17th time against unseeded Australian John Milman. Milman will need to be on his A-game if he stands any chance in this match as Federer has not dropped a set in the tournament.

Williams Closes in on Record

In the women’s game it was Serena Williams who made the headlines with a battling 6-0 4-6 6-3 victory over Kaia Kanepi to progress to the last eight. The 36-year-old made light work of the first set, winning 6-0 in less than 20 minutes.

The 17th seed is one of the few big names left in the competition with Angelique Kerber, Petra Kvitova, Caroline Garcia, Simona Halep and Caroline Wozniacki already out.

If veteran Williams clinches the US Open it will be her seventh Flushing Meadow title and victory would give her a 24th Grand Slam singles title. This would put her level with Margaret Court as the most decorated female tennis player of all time. 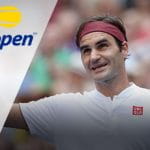