Next up in our series of articles looking at each group in the 2018 World Cup in Russia is Group B.

Group B features the current European champions, Portugal, along with another giant of world football, Spain. Rounding off the group are Iran and Morocco.

There’s obviously a big divide between the strengths of those first two teams compared to Iran and Morocco and it’s unlikely that we’ll see any surprises in this group. However, Spain shocked us all when they failed to get out of the group stages in the 2014 World Cup, so perhaps we shouldn’t write off each teams’ chances just yet.

Group B of the 2018 World Cup features Portugal, Spain, Morocco and Iran.

Winners of the 2010 World Cup, Spain dominated world football a decade ago, winning the European Championships either side of that World Cup win. It hasn’t gone their way since then, crashing out of the 2014 World Cup in the group stages and then losing to Italy in the round of 16 in the 2016 EUROs.

The team are back on the up though. They got revenge on Italy in qualifying by condemning the Italians to second place and a knock-out match which they lost to Sweden, missing out on this competition in the process. Spain dropped points just once in qualifying with a draw. Spain also beat Argentina 6-1 in a recent friendly that should send warning signals to other teams across the world.

The squad is formidable: La Roja still has a solid backbone of experienced players, such as Ramos, Iniesta and Piqué, but also has young stars coming through, such as Isco and Marco Asensio.

Starting in a fierce derby against Portugal could be key for Spain. The winner of that match, if there is one, will likely top the group, so a strong start is vital.

It’s just as hard to pick just a few key players as it is an eleven man team. World class footballers miss out on making the Spanish squad, such is its strength and depth.

David De Gea is probably the best goalkeeper in the world, while the experienced heads of Sergio Ramos and Gerard Piqué in front of him offer Spain more rearguard protection. Jordi Alba’s explosive play from wingback is a feature of both Barcelona and Spain.

David Silva and Andrés Iniesta anchor the midfield, while the young talents of Isco and Koke, among others, offer more attacking options from midfield. Up front, Diego Costa is likely to return to the squad and brings a rugged approach to Spain’s silky team.

Portugal topped their qualifying group with an impressive record of nine wins and one defeat. However, that was only enough to clinch the top spot from Switzerland on goal difference, with the Swiss earning the same record.

Portugal are the current European champions after beating France in the final in 2016. Portugal actually got off to a slow start and had the tournament’s new structure to thank for their progression into the knock-out stages, after drawing all three of their group games. They start off this campaign with the toughest fixture of all, facing Spain in Sochi on Fri 15 June.

Manager Fernando Santos has made his team tough to beat, but key players – including talisman Cristiano Ronaldo – are ageing. On the plus side, it’s a squad in transition. Portugal have done well via an organised defence and the talent’s of Ronaldo up-front, but players like Fonte and Pepe in defence may be playing their last tournament. They do now have more creative midfield and attacking players coming through, such as Bernardo and André Silva, along with the stalwarts Nani and Ricardo Quaresma.

Cristiano Ronaldo is undoubtedly Portugal’s key asset. Currently on 81 international goals in 148 appearances, Ronaldo is just three behind Portugal’s all-time top scorer Ferenc Puskás. Ronaldo is now 33 years of age, but is still one of the world’s best players without doubt.

Elsewhere, Ricardo Quaresma has been key in his link-up play with Ronaldo. A year older at 34, he is also reaching the end of his career. In André Silva, Portugal finally have a striker to do justice to Ronaldo’s service, while Manchester City’s Bernardo Silva will be the man expected to create things from midfield.

Ronaldo will be Portugal’s key player in Russia.

Morocco qualified for the tournament without conceding a goal, which tells all about manager Hervé Renard’s approach to the game. Three wins and three draws in a group containing the Ivory Coast is an impressive feat and the Atlas Lions are deserving of their place at the World Cup 2018.

But it’s not just in defence where Morocco are strong. A number of attacking options, combined with solidity and creativity in the midfield, means they are a little underrated and could be one of the surprise packages of this World Cup.

This is the first World Cup for Morocco since 1998, where they were eliminated in the group stages. But they have some experienced players who will be key. The first match is against Iran on Friday June 15.

As we mentioned, defensive solidity is a key part of Morocco’s game and in Juventus’ Mehdi Benatia, they have a defender playing regularly for one of the best defensive clubs in the world.

Morocco aren’t shy of talent elsewhere either. Southampton’s Sofiane Boufal is a talented winger, while Ajax’s Hakim Ziyech is a technically gifted emerging talent who could gain significant attention from major clubs should he perform well here.

This is the second successive World Cup appearance for the first time in Iran’s history, as they comfortably beat Korea Republic to top Group A of the Asia Pacific round. This will be the team’s fifth appearance at a World Cup, although they haven’t fared well historically, with just one win.

Manager Carlos Queiroz has done impressive things, with a record of just 8 losses in 69 games in charge. Like Morocco, defensive stability helped them through qualifying, as they conceded just two goals in six wins and four draws.

But Queiroz has also exhibited other tactics in recent games. In a string of friendlies, Iran played a more high-pressing game as opposed to their typical quick, counter-attacking football. Either way, this style makes Iran a difficult team to play against for anyone.

Sardar Azmoun plays for Rubin Kazan and already has 22 goals for his country despite being just 22 years of age. Azmoun is constantly linked with a number of European clubs and is undoubtedly the great hope of this team.

This looks pretty obvious on paper and it would certainly be a shock should Spain or Portugal not qualify for the next round.

The bookies agree, with Spain around 1/16 and Portugal 2/9 to qualify. Morocco are fancied more than Iran to make it through, at 4/1.

But, we don’t think there will be any surprises with the table, so we’re looking elsewhere for value and specifically at the opening match between Portugal and Spain.

We fancy Spain to start strongly and make their mark on the competition, so a Spain win in that match seems a good bet at around 10/11. 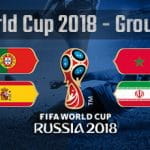