Qatar wins the Asian Cup with a victory over Japan

Qatar have rounded off a spectacular Asian Cup campaign with victory over Japan in the final. The next World Cup hosts defied the odds to win the competition.

The Asian Cup ended with the 2022 World Cup hosts Qatar winning the tournament for the first time ever in their history, overcoming four-time winners Japan 3 – 1 in the final. The star of the show was 19-year old forward Almoez Ali, who broke the record of goals scored by a player in the Cup with nine. Ali also picked up the Golden Boot award along with the Player of the Tournament award. Qatar’s Most Valuable Player was Akram Afif, who provided ten assists over the seven-match competition in the United Arab Emirates, including two in the final.

Ali opened the scoring with a masterpiece overhead kick before Abdulaziz Hatem curled in from 20-yards for the second to give Qatar a 2 – 0 advantage at half time. Japan managed to reduce the deficit through a fired shot from inside the box by Takumi Minamino in the 69th minute to keep alive their hopes in the match. These hopes were dashed in the 83rd minute when Akram Afif converted from the spot to secure a 3 – 1 lead after their captain Maya Yoshida handled in the area with VAR confirming the incident.

The Qatar team scored 16 unanswered goals in their quest to the final and kept a record six clean sheets. The 1 – 0 victory against much-fancied South Korea, who had Premier League star Heung-Min Son in their ranks in the Quarterfinals, was possibly the greatest surprise of the tournament. Son said after the game that he was “running on empty“. However, the Spurs player looked back to his best when he returned to England, scoring in two consecutive matches for the English side.

The toughest mental test for the Champions was against hostile host the United Arab Emirates. Due to tensions in the area and an ongoing Gulf blockage, many Qatar fans didn’t make the trip. Those that did had to endure their national anthem being booed by the home side as well as instances of bottles and shoes being thrown at the players. Qatar kept their cool and did their talking on the pitch, emerging as 4-0 victors and setting up a final with four-time Asian Cup winners Japan.

Japan had a perfect record in the group stage to book a quarterfinal clash with Vietnam, whom they eased past courtesy of a VAR penalty which was converted for a 1 -0 win. In another high scoring semi-final, Japan were 3 – 0 winners against Iran, as Yuya Osako returned to the starting line up to score a second-half brace to send them to the final.

The Asian champions had an impressive tournament – ideal preparation with just three years until they host the World Cup. Coach Felix Sanchez’s side had not let in a goal for 10 hours and eight minutes prior to Minamino’s strike. That was the only goal they conceded in the entire tournament.

The manner in which Qatar won the tournament was a bold statement to the world that they will not only be mere hosts but potential contenders of the most prestigious title in International Football. They have a real quality squad including Asian Player of the Year in marauding left-back Abdelkarim Hassan. Their star list now includes the Asian Cup Golden Boot-winner, Almoez Ali, and Akram Afif, the leading assist provider.

Qatar, the world number 93 team, was knocked out of the 2015 edition of the Asian Cup in Australia without earning even a single point. This progress in such a short time is rich rewards for the investment in the sport by the Qatar state and will have no doubt changed perceptions. Although on a smaller stage, it was a performance that draws a comparison with the last host of the World Cup. Russia reached the quarterfinals of the 2018 World Cup as the host after years of indifferent results.

The Asian Champions and the runners up, Japan, head to South America as guests to play in the Copa America that starts in June. It would be an amazing achievement to be crowned both Asian and American champions but they are likely to face a much sterner test in the shape of a group that features Paraguay, Colombia, and Argentina. Runners-up Japan are grouped with Uruguay, Chile, and Ecuador. 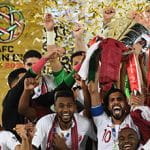