Novak Djokovic wins the 2018 US Open

Novak Djokovic’s victory in the 2018 US Open has ensured the 31-year-old will always be remembered as one of tennis’ greats. His win against Juan Martin del Potro in the final gave Novak his fourteenth major and placed the Serbian in third place in the list of all-time singles career title winners. Only Rafael Nadal (17) and Roger Federer (20) have more grand slam titles in the men’s game.

Djokovic put two years of disappointment behind him as he added the US Open title to the Wimbledon crown he won this summer. Injury problems and issues in his private life had contributed to a barren spell for Novak, failing to win a slam since taking the 2016 French Open title.

Novak is looking back to his brilliant best and this battling victory at Flushing Meadows was testament to the mental strength of the 31-year-old. The US Open hasn’t been the happiest of events for Djokovic in the past. He has been in eight finals but only won the event previously in 2011 and 2015.

His opponent ensured he worked hard for the victory. Del Potro came from a break down in the second and third sets but ultimately it was the physical aspect of Novak’s game that proved too strong for his opponent, who was frustrated by his powerful serves being returned to him with such regularity throughout the match.

Even Del Potro’s forehand, so often a game changer in his matches, proved ineffective against Novak’s returns and the match was over in three hours and 16 minutes with the Serb winning 6-3 7-6 (7-4) 6-3.

Friends off the court, Djokovic showed his class by comforting an emotional Del Potro who shed tears in his chair at the end of the contest, but the 29-year-old played his part in a thrilling contest in the Big Apple and can be proud of his performance.

Naomi Osaka’s victory in the US Open final was overshadowed by an incredible argument between opponent Serena Williams and umpire Carlos Ramos. Serena argued with Ramos during her 6-2, 6-4 defeat to Osaka, which resulted in the 23-time grand slam singles champion being docked a game.

The incident started in the second set when Williams was handed a coaching violation, a charge her coach admitted after the game, but one denied by Williams who stated she felt her coach was just encouraging her.

Clearly incensed by the decision, Williams once again incurred further code violations for racket abuse and verbal abuse later in the game. When Williams accused Ramos of being a “liar” and a “thief” and insisting the umpire owed her an apology, the umpire deducted a game from the 36-year-old. After the defeat Williams took to social media claiming that the umpire was sexist and that men are treated differently in the game. She stated that a male wouldn’t have faced sanctions if he had said the same to an umpire. 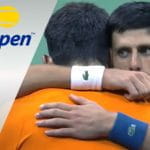