It was mixed fortunes for the English teams involved in Champions League action this week. Tottenham stunned the Bundesliga leaders Borussia Dortmund with a 3-0 scoreline. Manchester United will need to pull off a spectacular performance in the second leg against PSG to keep their European hopes alive.

Tottenham produced a scintillating second-half performance to beat Bundesliga leaders Borussia Dortmund 3-0 at Wembley. A tight first half gave little indication of the goal fest that would take place in the second half as Tottenham almost guarantee themselves a place in the last eight.

Few would have predicted the 3-0 scoreline at half-time. Dortmund were the better of the two sides in the first half with Tottenham relying on a series of good saves from Hugo Lloris to keep them in the game.

English clubs have enjoyed mixed fortunes in the first of the Round of 16 fixtures. Tottenham beat Bundesliga leaders Borussia Dortmund whilst Manchester United were beaten at home by PSG.

Most impressive was the save from Dan-Axel Zagadou’s header which the 32-year-old Tottenham and France captain managed to keep out. Pressure from Borussia Dortmund was building and the whistle for the break allowed Tottenham to regroup.

Whatever Mauricio Pochettino said at half-time did the trick and two minutes after the interval Tottenham took the lead. The at times irrepressible Son Heung-min continuing his rich goal-scoring form by hitting a volley from Jan Vertonghen’s cross.

The game ebbed and flowed with both teams squandering chances but it was the London side that increased their advantage in the 83rd minute. The highly impressive Vertonghen assisted the first goal and then scored the second. The Belgium slid in to convert from a Serge Aurier delivery.

Three minutes later Tottenham made the score 3-0 when substitute Fernando Llorente headed in at the near post a Christian Eriksen delivery.

Tottenham this year have shown incredible resilience. Most teams would struggle losing a key star but Tottenham has had to endure losing captain Harry Kane, Dele Alli and was without the services of Son Heung-min for many weeks due to his participation in the Asia Cup. Despite these absences, Tottenham has maintained their challenge in the Premier League and this result against Dortmund is likely to see their European adventures continue.

In stark contrast, the chances of Manchester United qualifying for the next stage are hanging by a thread. Despite the feel-good factor returning to Old Trafford, Ole Gunnar Solskjaer suffered his first defeat as Manchester United caretaker manager at the hands of PSG, who ran out 2-0 winners in Manchester.

Pre-match, United had been made unlikely favourites for this clash. PSG suffered injuries to star players Neymar and Edinson Cavani and this, combined with the form of the Manchester club, had made them outsiders. With hindsight, this was a miscalculation, as the French club still had plenty of quality in their ranks, including 20-year-old wonder kid Kylian Mbappé.

A feisty first half saw plenty of fouls and yellow cards (5) but little in the way of goalmouth action. This changed in the second half with PSG showing a ruthless streak that gave the visitors two quickfire goals in the space of seven minutes.

It was Manchester United old boy Angel Di Maria who did the majority of the damage. United paid nearly £60m for the player in 2014 but the winger struggled in Manchester and after falling out with then manager Louis van Gaal the Argentinian moved onto PSG after just one season.

Enjoying his role as the pantomime villain, Di Maria showed the Old Trafford faithful what they were missing. His 53rd-minute corner allowed Presnel Kimpembe to score at the far post. Shortly after he threaded the ball to Kylian Mbappe who showed his immense quality by calmly converting.

As is common with games involving Manchester United, the scoreline was only kept at a reasonable level due to the brilliance of David de Gea, with his saves stopping a difficult task becoming an impossible one. United suffered from injuries to Jesse Lingard and Anthony Martial near the half-time mark and without those creative players, United looked flat and lacking imagination.

If United are to defy the odds and qualify in the second leg in Paris they will have to do it without influential player Paul Pogba. Pogba was shown a second yellow card in the 89th minute meaning the World Cup winner will miss the game. Pogba, along with de Gea, has been in good form and his suspension is a big blow to United’s slim chances of progressing. 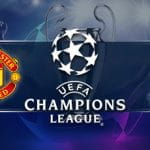