With the Ashes series starting next week, England are playing a final preparation game against Cricket Australia XI. Mark Stoneman has cemented his reputation as a reliable opening batsman with a stand of 111, with Alastair Cook contributing 70, to end the second day of action. England finished the day with a score of 337-3 in response to Cricket Australia XI’s 250 all out.

Although the quality of this opposition is a far cry from what England can expect to face in the Ashes, the Barmy Army faithful will be pleased with the form that Stoneman is showing and will give a degree of optimism after the bedlam caused by the exclusion of Ben Stokes and Alex Hales.

Ben Stokes was arrested in September on suspicion of actual bodily harm. An altercation at a nightclub left a 27-year-old man suffering from facial injuries for which he received hospital care. Police are still investigating the incident.

Alex Hales is not suspected as being the person who caused the injuries, but was asked by Avon and Somerset police to give a witness statement over the incident.

Despite Stokes or Hales not being charged by the police, neither will be considered to play for England until the police investigation has concluded. This is not expected to happen until at least the third Ashes test game which starts on December 14th.

Stokes, who made his test debut vs Australia at the Adelaide Oval on December 5th in 2013, was formally England’s vice-captain before his arrest and was considered vital to England’s chances of winning the Ashes. Something picked up on by Australian legend Shane Warne.

During an interview for The Sun he said:

England’s main concern is they have to pick two players to replace Ben Stokes, he’s a horrific loss… they stand to pay a very high price for the all-rounder’s stupidity. But I have a feeling they are trying hard to find a way for Ben to play a part sooner rather than later in this Ashes series. One thing is certain, Test cricket as a spectacle is poorer for his absence.– Shane Warne, former Australia cricketer

One player who is likely to benefit from Ben Stoke’s omission from the team is Craig Overton. The 23-year-old pace bowler who plays for Somerset has taken six wickets in a week and will hope to take full advantage. England’s bowling consultant Shane Bond has been complimentary of Overton’s recent performances and said after the first day of England’s match against Cricket Australia XI:

I was pleased for Craig, that was a really good performance. He bowled 18 strong overs, used the short ball and created chances. He’s building well and he’ll certainly be ready for the Test match.– Shane Bond, England bowling consultant

When will The Ashes be played?

The first test is held in Brisbane on November 23rd and potentially finishes on the 27th. The second one is held in Adelaide on the 2nd December. The action then moves to Perth on the 14th December and on to Melbourne on Christmas day. The fifth and final test takes place in Sydney on the 3rd of January with the closing date (subject to play) scheduled for January the 7th.

Bookmakers are backing an Australian victory with 2/5 offered for a win on home soil. England are out at 10/3 with 7/1 being offered on the series ending in a draw. 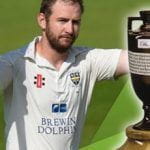