Manchester City threw away a once in a lifetime opportunity to secure the Premier League title in front of their own fans and against bitter rivals Manchester United. City’s first half performance showed why they are champions elect, just 45 minutes away from being crowned Premier League winners. The second half was a different story with goals from Paul Pogba and Chris Smalling postponing the City celebrations.

This had all the hallmarks of a classic Manchester derby. The runaway league leaders Manchester City had everything to play for. A win against United and City would have been the quickest team ever to claim the title, shattering the record currently held ironically by Arsenal and Manchester United.

Adding in to this mix was the prickly relationship between Pep Guardiola and José Mourinho. The rivalry started in the Spanish league but seems to be reaching maturity on English soil. Mourinho has been vocal in his belief that his team doesn’t receive credit for their performances, whereas pundits have been gushing in their praise for Guardiola’s team and their style of play.

United produced a spectacular second half of football to overturn a two-goal deficit. United won 3-2 thanks to two goals from Paul Pogba and the winner from unlikely hero, Chris Smalling.

Manchester City started the game without a recognised striker with Sergio Agüero and Gabriel Jesus starting on the bench. This tactic seemed to work as the superior numbers in midfield compacted the action and helped City keep possession and allowed Sane, Sterling and Bernado an opportunity to rotate forward duties.

There was a sense of inevitability about Manchester City’s first goal when it was scored in the twenty-fifth minute. Captain Vincent Kompany muscled his way through the reds defence to head in a Leroy Sane corner. United fans will no doubt have been experiencing a feeling of Déjà vu as Kompany scored an almost identical effort in 2012 on the way to City’s first Premier League title that year.

Just five minutes later the lead was increased to two when Gündogan scored a magnificent goal after a classic turn and smart finish. City could and should have been out of sight in the game. Sterling missed two clear-cut chances, hitting hard over the bar when it seemed easier to score. Had one of his efforts gone in a cricket score like score line seemed likely. United were fortunate to go in at the interval two down.

The second half saw an incredible transformation in the mentality and work-rate of José Mourinho’s team and spearheading this change was under fire midfielder Paul Pogba. After a disappointing first half, the £89 million man played a more attacking role in the second and appeared more committed and passionate about his game. He was everywhere making tackles, causing all sorts of problems and discomfort to the Man City midfield.

This approach paid dividends and just eight minutes into the second half Pogba headed in to half the deficit, then two minutes later he scored again to level the game. In the 69th minute Smalling made up for his earlier defensive errors with a classic tap in from a Sánchez free kick to score what would be the winning goal.

Manchester City came close in the dying minutes but it was too late and they had to keep the fireworks and save the celebrations for a different day. The match was in danger of becoming a brawl on occasions with tempers flaring on both sides. Ashley Young was lucky not to concede a penalty and a probable red card for a wild tackle on Sergio Agüero in the area. United had to once again rely on goal-keeper David De Gea. De Gea lived up to his reputation as being one of the best in the world by producing a stunning one-handed diving save to prevent Agüero from scoring.

This result will mean very little in the destination of the title but it was a huge result for United in their quest to claim second spot. Closest rivals Liverpool were held 0-0 in their derby with Everton so Manchester United now have a 4-point advantage over their north-western rivals.

City will need to clear their heads fast, they have a difficult trip to Wembley on Saturday night to face 4th place Tottenham. Spurs are on fine form at the moment and should be difficult opposition in an intriguing encounter, while City lost in the Champions League to Liverpool on Tuesday and crashed out of that competition.

Even if City win that match they won’t be champions, they would need West Brom to beat Manchester United on Sunday for that to happen. But with a 13-point gap and just six games left, it surely is a case of when, not if. 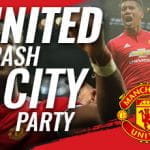