Manchester City are champions for the 2017-2018 season after fierce rivals United suffered a surprise defeat by lowly West Brom which confirms City as the Premier League winners. In winning the league, City complete a double of titles having won the EFL Cup back in February with a comprehensive 3-0 win over Arsenal.

Manchester City survive their worst week of the season to claim the Premier League title for the third time in seven seasons and the first under Pep Guardiola. Defeat against Manchester United postponed the celebrations for a week but a 3-1 away victory against 4th place Tottenham and United’s 1-0 defeat at home to West Bromwich Albion handed the Citizens their fifth top-flight crown.

With still five games of the season remaining, Manchester City have secured the Premier League title. Manchester United’s shock home defeat handed the title to City without a ball being kicked.

There can be no doubt that Manchester City are worthy champions. So much so that much of the media attention over the last couple of months has been on Manchester United, Chelsea, Tottenham, Liverpool and Arsenal’s quest for a top four finish, such has been the dominance and inevitability of a City Premier League title.

City have simply been on another planet and it even looked for a long time that City could match Arsenal’s Invincibles and go the whole Premier League season unbeaten. In fact, few would have bet against them winning an unprecedented quadruple of trophies.

However, defeat against lowly League One side Wigan in the FA Cup quelled any talk of a quadruple. Liverpool also took care of any chance of a treble of trophies by soundly beating Guardiola’s team both home and away in the Champions League, winning 5-1 on aggregate. In the league however, City were never in real danger of being caught.

Goals mean the title and City had goals flowing through the side. Sergio Agüero was in his usual prolific striker form this year hitting 30 goals and 7 assists. Raheem Sterling wasn’t that far behind despite some high-profile misses, but 22 goals and 9 assists is a record that most teams would die for.

Gabriel Jesus is often a peripheral figure but behind his stats of 14 goals and 9 assists you will see a 70% shot on target rate, which is incredible when compared to 56% for Sterling and 54% for Agüero. The team was also helped with 13 from Leroy Sané, 11 from Kevin De Bruyne and an incredible 20 assists. The list just goes on and on.

Pep Guardiola arrived at Manchester City with a fanfare in the summer of 2016. Bizarrely, the announcement that he would succeed Manuel Pellegrini was made whilst the Chilean was still in charge of the club in February 2016.

Another reason why it was strange was due to the timing of Pep’s forthcoming appointment, as at the time City were still in the hunt for four trophies. However, it was well reported that Pep was in advanced stages to join the club in 2012 but the deal fell through and City didn’t dare risk missing out on a manager who had become Barcelona’s most successful manager, with 14 trophies in four years.

If the City board needed any more convincing, Pep also won the German Bundesliga twice in his two full seasons with Bayern, who he joined after Barcelona.

More good news for the blue side of Manchester is the decision by the Court of Arbitration for Sport to clear Manchester City of any wrong doing in the signing of Argentinian teenager Benjamin Garre.

The champions faced a real-risk of a transfer ban if they were found guilty of misconduct with regards to signing the youngster from Argentine club Velez Sarsfield back in 2016.

Velez Sarsfield, who play in the top tier of the Argentine Primera División, argued that as Garre was 16 at the time of the transfer, this meant he was ineligible for transfer to a European side, as FIFA rules only allow players under the age of 18 to move between clubs in different countries if both are in the European Union.

City successfully argued that as Benjamin Garre holds an Italian passport, he was entitled to move any time after his 16th birthday. This news will come as a huge relief for City as high profile teams such as Barcelona, Real Madrid and Atletico Madrid have all had transfer bans placed upon them with regards to signing of under 18-year-old players, which severely hit their recruitment plans.

City will no doubt been particularly nervous as they were fined £300,000 and banned from signing academy players for two years for a similar offence last year.

With reports that Pep will be handed a £200 million war chest this summer, this news will allow a sigh of relief for the City faithful. 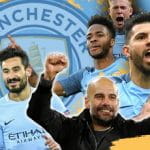