John Terry, former Chelsea and England captain, has announced his decision to retire from football after an illustrious career spanning over twenty years.

Terry left Aston Villa earlier this year after failing to win promotion to the Premier League with the club when they lost in the play-off final to Fulham. Terry has since been without a club after turning down a move to Spartak Moscow.

In a career littered with trophies, Terry won five Premier League titles, five FA Cups, a Champions League medal, five league cups and a Europa League, making him Chelsea’s most decorated player. He is one of just three Chelsea players to have made over 700 appearances for the club.

Terry won and lost a Champions League final while playing for Chelsea.

Terry made his debut for Chelsea as a 17-year old in 1998, but was loaned out the following season. He quickly made a name for himself at Nottingham Forest under David Platt and was re-called to Chelsea.

Throughout the 2000-01 and 2001-02 seasons Terry established himself as Chelsea’s first choice centre-back. Once Marcel Desailly retired, Terry was made club captain by new manager José Mourinho.

Terry immediately repaid his manager’s trust. Chelsea strolled to victory in the 2004-05 Premier League season, with the best defensive record ever and a new highest points total. Terry was voted player of the year, scoring eight goals in the league, and was also voted the best defender in the Champions League that season.

Chelsea successfully defended their title the following year. However, some difficult times were to follow. A recurring back injury which eventually required surgery kept him out for much of the 2006-07 season. Numerous injuries followed, including a dislocated elbow in May 2008, which Chelsea feared would keep Terry out of the upcoming Champions League final against Manchester United.

Terry recovered, but perhaps he wishes he hadn’t featured in the match. The game went to penalties and Terry stepped up to take what could have been a Champions League winning penalty. Instead, he slipped during his run up, skewing the ball into the post. With the miss, the Blues lost the shoot-out and the Champions League, while Terry broke into tears.

The Blues won the double in the 2009-10 season, but it wasn’t until 2012 when they were back in the Champions League final. Chelsea finally won the trophy that year, but it was bittersweet for Terry. Sent off in the semi-final against Barcelona, he was suspended for the final, which Chelsea won on penalties.

The player remained at the club until the 2016-17 season. Coming off in the 26th minute in respect to his shirt number, Terry was given a guard of honours from his teammates in his final match.

After his debut in 2003 and featuring at EURO 2004, Terry was made England captain in 2006 by Steve McClaren. While his international career is not as glittered with titles as at his club, Terry was a vital figure in the England team.

Elimination in the quarter-final in the 2006 World Cup to Portugal left Terry in tears, but England then failed to qualify for the next competition, EURO 2008, for the first time since the 1994 World Cup.

Terry captained the team throughout qualification to the 2010 World Cup, but he was replaced by Rio Ferdinand due to off the pitch controversy. England were once again disappointing, barely scraping through the groups before being thoroughly beaten by Germany in the round of 16.

After getting knocked out on penalties by Italy at EURO 2012, Terry announced his retirement from international football. Terry’s time as an England international was turbulent and one that was full of controversies that seemed to him throughout his career.

A career full of controversies

Despite his straight-forward approach on the field, controversy followed the player off it. In 2001, he and other Chelsea players were fined for drunken behaviour around American tourists shortly after the 9/11 tragedy.

In 2010, the High Court lifted an injunction on an alleged affair between Terry and an ex-partner of his England and Chelsea teammate Wayne Bridge. That led to England manager Fabio Capello stripping Terry of the England captaincy, as well as a famous fallout between the two players.

But that was nothing compared with what was to come. In 2011, Terry became involved in a police investigation into whether he had racially abused Anton Ferdinand during a match between Chelsea and Queens Park Rangers. Video footage seemed to confirm the abuse, and Terry was charged with using racist language. He was also once again stripped of his England captaincy, this time by the Football Association, after it was reinstated to him beforehand.

Despite being found not guilty in court, the FA charged Terry with a four-match band and a £220,000 ban. Just prior to the ruling, Terry announced he was retiring from international football due to the negative publicity around the case. 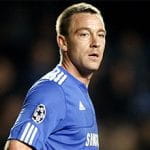