Britain’s Johanna Konta bravely fought back after losing the first set to claim victory over Jelena Ostapenko. The former top ten ranked player lost 6-7 in the first set but completed a dramatic comeback to take the next two sets 6-1 and 6-2.

Johanna Konta continued with her recovery back from injuries and a loss of form with a morale boosting win over Jelena Ostapenko in the Rogers Cup. Last year, the 27-year-old was ranked at number nine in the ATP rankings, but a mixture of injuries and surprise defeats had seen her rankings plummet to 43rd in the world before this match.

British number one Johanna Konta is back to winning ways.

The action started off well for Konta, securing a 3-0 lead, but a determined Ostapenko fought back and won the tie-break 8-6. This seemed to motivate Konta against the 2017 French Open champion, and she took just 68 minutes to win the remaining two sets, such was the intensity of play.

Konta faces Belarusian Victoria Azarenka in the next round. Azarenka is a former world number 1 back in 2012 and won the Australian Open singles titles in both 2012 and 2013. Azarenka will be a stern test for the Brit and she will need to try and emulate her recent unbelievable victory over Serena Williams, after inflicting the worse defeat in the 23-time Grand Slam winner’s career with a score line of 6-1 and 6-0.

This victory will give British tennis fans hope that Konta is finally getting back to her top game. The public fell in love with Konta with her heroics at Wimbledon in 2017. After being written off my most experts, Konta reached the semi-finals of the competition, but was eventually beaten by the legendary Venus Williams 6-4, 6-2.

Konta is also in contention for a title in the doubles, after she and partner Shuai Zhang ground out a victory against Romanian pairing of Irina-Camelia Begu and Simona Halep. Konta and Zhang lost the first set 4-6 before fighting back in an energy draining game that lasted just under two hours.

It wasn’t all good news for the British women though. Katie Boulter suffered a straight sets defeat to Lesia Tsurenko in the first round. Had Boulter beaten the Ukrainian, the 22-year-old would have broken into the top 100 for the first time in her career.

Whilst Konta’s form is improving the same cannot be said for the men’s British number one Kyle Edmund. Diego Schwartzman beat Edmund soundly with a 6-1, 6-2 score line and to complete a miserable week for the world number 16, he was beaten by Andy Murray in the Washington Open last week.

Edmund, who is ranked at 16th by the ATP, was facing 12th ranked Schwartzman, but Edmund had no answer to the frantic start from Schwartzman and the Argentine raced into a 3-0 lead. The Brit lost that set 6-1. Edmund started better in the second set, tying the set 2-2 but the Argentine didn’t lose another, finishing the deciding set 6-2 an easy victory in the end. 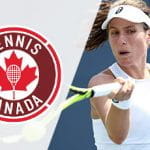