A last gasp drop goal against France, just one pass away from defeat against Wales & surviving three try scoring opportunities for Scotland. These are the small margins between defeat and victory. Ireland certainly rode their luck, but this matters little, as Ireland are Six Nations champions.

Ireland went into their early game against Scotland five points clear of England who were sitting in second place. Knowing that they needed the win and the bonus point to put the pressure on England who were playing France in the later match, Ireland played their part and beat the Scots 28-8 with two tries from Stockdale proving pivotal.

Ireland have won the Six Nations title with one game to spare. They can claim the grand slam with victory against England.

So, England knew what they had to do: score four tries and win away in France otherwise it would be an Irish championship win. To make the stakes even higher, the last game England play would be against the Irish. Lose that and you give your rivals a chance to win the Grand Slam at your home ground, so the pressure was on the English.

The game itself was a tense affair with the gravity of the occasion weighing heavily on the Lion’s shoulders. They barely looked like a team who would be able to secure four tries and the win to take the title race into the final weekend. And while England had at least improved on the lacklustre performance against Scotland, it was once again a lack of discipline that cost them dearly. England conceded a penalty try and five penalties to gift the French an unlikely 22-16 victory.

The match between England and Ireland is likely to be a feisty affair and comments made by England head coach Eddie Jones will have only added to the acrimony between the teams. Jones was an after-dinner speaker and made derogatory comments about Wales and Saturday’s opponents Ireland.

Footage released by the BBC shows Jones describing Wales as a “shitty little place” and referred to the Irish team as the “scummy Irish”. In the video, he can be heard to say:

Jones also commented on Wales, the only team England have managed to beat in this year’s competition, saying:

Who knows Wales? Are there any Welsh people here? So, it’s this little shit place that has got three million people. Three million!– Eddie Jones, England Rugby Coach

Despite the video being on YouTube since last year, it has only just gained widespread public attention as the build-up to the vital clash intensifies. Jones has publicly apologised for his comments. Jones’s outburst has also landed him in trouble with the RFU with the governing body saying his remarks were inappropriate and have apologised to their counterparts in Ireland and Wales.

Ireland are likely to use Jones’s comments in their team talk but the chance to achieve the Grand Slam on St Patrick’s day at England’s ground should, in reality, be incentive enough. For England, they get a chance to avenge last season’s result against the Irish. The 13-9 final game defeat cost England the Grand Slam. England have not enjoyed the best of tournaments this year but will be able to go out on a high with a victory over the new champions. 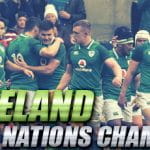