Harry Kane has become the latest member of the elite 100 club. His controversial penalty against Liverpool has taken his Premier League goals tally to one hundred. The Tottenham striker became the second fastest player in Premier League history to reach the milestone.

Harry Kane netted his 100th Premier League goal on Sunday evening, becoming the second fastest player ever to do so.

Alan Shearer was one of the first to congratulate the England striker on his achievement. Shearer couldn’t resist a slight dig at the Tottenham player in a video message in which he asks Kane, “what took you so long?”.

He also went on to praise Kane’s strength of character, referring to the Liverpool match in which he missed a penalty but had the self-belief and confidence to take his chance when a second penalty was awarded to Tottenham. Kane made no mistake on the second penalty, a goal that gave him the 100 goals total.

It is inevitable that once a footballer excels at a club, rumours will start about a possible move to pastures new. This has been the case with Kane, with Spanish giants Real Madrid often credited with a move for the Spurs striker.

There has also been rumoured interest from the elite Premiership clubs with the Manchester clubs often mentioned in the gossip pages with an unlikely move for Harry. In December last year, Kane had an interview with German newspaper Bild am Sonntag in which he said:

My goal is to play my entire career only for Tottenham, we have a fantastic team, a great coach, a professional training centre and we’re getting a new stadium. At the moment, everything suits me here and I’m happy.– Harry Kane, Tottenham footballer

This stance seems to be softening a bit over the last couple of months with subsequent interviews seeming to suggest that Harry is happy to remain at Spurs as long as they start to win trophies, something the London club has struggled to do, winning a solitary League Cup trophy this century.

Tottenham are playing great football, have some fantastic players in the shape of Dele Ali, Hugo Lloris, and Heung-Min Son, to name just a few, but they are in danger of these star players being picked off by the European powerhouses, unless Spurs are able to turn spectator-friendly football into silverware.

One person who backs this point of view is former England and Manchester United captain Wayne Rooney. He believes that Kane will stay at Spurs, at least in the short term but feels that Tottenham need to turn potential into winners for Harry to stay at the club. Rooney said:

At the moment, he is probably the best striker in Europe. He can go where he wants to, he’s that good. He is like a young Alan Shearer. He scores all different types of goals. The problem that Tottenham are going to have is that his motivation is goals, but his motivation is going to change from goals to trophies.– Wayne Rooney, Everton footballer

Another factor that may turn the Premier League’s top scorer’s head is the fact that Daniel Levy insists on a strict wage structure which is starting to look paltry when compared to the league’s top earners.

As an example, Romelu Lukaku is well short of the goal output that Kane gives, yet he reputedly earns double what the Englishman earns each week. Daniel Levy may be a tough negotiator when selling players but he may have to soften his stance with regards to wages if he is keep hold of one of the English game’s best talents.

If he does remain loyal at Spurs, few would bet against him continuing his goal-scoring antics and with age on his side, Harry Kane could be the one to topple Alan Shearer’s record of 260 Premier League goals. 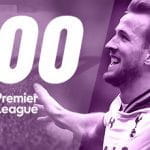