Lewis Hamilton’s path to a sixth world title seems inevitable at this stage, as even with a self-proclaimed “worst weekends I can remember” his lead extended at the top of the Championship leaderboard. It was a race that was a bit crazy from the outset, and with many risky moments for the reigning world champion. There was action and drama all over the track, and it was one of the most exciting races from a fan perspective this season.

The treacherous weather conditions ensured this German GP was a race to go down as one of the most exciting of this season. The drivers themselves were finding the track conditions particularly difficult, and the wet track enabled some particularly surprising results on the day of the race. It was a difficult day for every member of the team. The analysts were frantically trying to forecast the weather and advise an appropriate strategy. Drivers had the difficult task of keeping the car performing at the limit, in changing conditions, despite the limit being very unclear. Finally, the mechanics were being run around as the car was constantly making visits to the pit-stops: Max Verstappen made five stops on his way to victory.

Was this the best Open Championship ever?

It was truly unique conditions for the German GP, and the race is not usually one that is characterised by bad weather. But this was to be a day where the weather truly changed the race for everyone involved and would be the defining factor. The teams that were most equipped to deal with regular pit-stops and analyse the weather systems proved the most successful. You’ll have to go back all the way to 1993 when Alain Prost of team Williams made 7 pit-stops, finishing 3rd.

Because of the seriousness of the rainfall, the track was particularly treacherous in places. The drivers that were able to push the car to the limits whilst minimising errors ultimately were successful in the race. With so much technology in Formula 1 cars, the drivers had a lot of assistance in this regard, yet there was still a lot of problems. The slippery corners proved to be a deciding factor in the race. Nobody more than Hamilton felt the brunt of this chaos as he dropped to the last position, before finally making a dramatic late come back to cross the line in ninth place.

It was an action-packed day in Germany over the weekend, and with drivers feeling this race was one of the most intense and difficult of the season, the two-week break before the next GP will be welcomed with open arms.

It just shows you how easy it is to get a weekend wrong. But we stay united and pull together and regroup and come back fighting for the next one. We were still doing pretty awesome until the domino effect. We need to take the positives and leave all the negatives out. It’s only one race and we keep moving forwards.–Lewis Hamilton, F1 Driver at Mercedes. 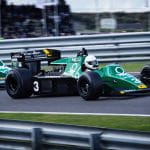