FA Cup fourth round draw made

The draw has been made for the fourth round of the FA Cup and has pitched together the two most successful teams in the competitions long history together.

Manchester United will be heading to the Emirates to renew their rivalry against Arsenal in the most captivating fixture to look forward to of the FA Cup fourth round draw. They both had a comfortable third round, with Manchester United beating Reading and Arsenal winning away at Blackpool.

The draw for the fourth round of the FA Cup has been made and has produced some interesting fixtures. Manchester United travel to Arsenal in the pick of the matches.

Just 14 Premier League teams are still in the tournament and six have been drawn against one another. The reigning Premier League champions Manchester City are at home to relegation-battling Burnley, while the other top-flight match-up sees Crystal Palace host Tottenham Hotspurs. The third encounter is the mouth-watering clash at the Emirates, with the FA Cup being the most credible chance of silverware for both Arsenal and Manchester United. The reigning FA Cup champions Chelsea will take on Sheffield Wednesday or Luton Town at Stamford Bridge as they look to defend their title.

The biggest name missing from the fourth round of the competition is league leaders Liverpool. The Merseysiders lost 2 – 1 at the hands of Wolves on Monday night. This is the Reds’ second consecutive loss after they were beaten by the same scoreline by title rivals Manchester City at the weekend. Manager Jürgen Klopp gambled with his team selection by resting star players and this tactic backfired as they struggled to match the intensity of Wolves. Liverpool are the only team in the top six not featured in this stage of the oldest football competition in the world.

Wolves will face either Stoke or Shrewsbury who have a replay after a 1 – 1 draw. West Ham had a comfortable 2 – 0 win at home against Birmingham and will be away to AFC Wimbledon. Brighton survived a tough test away against Bournemouth to win 3 – 1 now welcome West Brom at their own ground. Everton face Millwall, while Southampton will have to wait for the match between Accrington and Derby to know whom they face next. Watford also face a wait to see if they will be facing Newcastle or Blackburn.

League One Gillingham knocked out Premier League side Cardiff in the third round with a 1-0 scoreline and will face another Welsh challenge as they will be travelling to face Swansea City.

Non-league Barnet – the lowest ranked club still calling shots in the tournament – welcome Championship side Brentford to their turf. The Conference team have been masters of the single goal victory as shown against Sheffield United and Stockport and will hope this run continues in the fourth round.

The fourth round is scheduled for the weekend of 26th January. 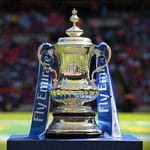