The delayed 2020 Euros are just over a week away, so join us as we assess the chances of the bookmaker’s favourites. France has some of the world’s best players and is many people’s tip for the tournament. England has a good chance as they will be playing their group games at Wembley, but you can never rule out the world number one ranked club, Belgium. A young Spanish team could prove to be dark horses, and you can never rule out the Germans!

France– The reigning World Champions have one of the best teams and a proven manager in the competition. Kylian Mbappe arguably the best player in the world, taking over from Cristiano Ronaldo and Lionel Messi’s reign. Les Blues midfield is the one to look out for after a man of the match performance by Ngolo Kante in the Champions League final that has warranted him a shot for the prestigious Balon d’Or. They work wonders alongside Paul Pogba, a very different player for France from the one he is for Manchester United. A surprise call up for Karim Benzema after a six-year hiatus makes them a much better side, his inclusion an upgrade to Oliver Giroud, who failed to score a goal in the entire World Cup campaign. The Real Madrid star has thirty goals this season; teaming up with Antonio Griezmann and Mbappe upfront is an exciting attacking combination to look out for. The biggest worry is the defence with whoever partners Raphael Varane, who has shown glimpses of great performances for his country but has been mistake-prone with his club and has suffered from injuries. The Real Madrid man is a rumoured target for Premier League clubs, with the player just having a year left on his contract. Despite defensive frailties, France’s tactic is likely to be outscoring their opponents, and with the talent at their disposal, that could be a tactic that works.

Players to watch: Kylian Mbappe and Antonio Griezmann both scored four goals in the World Cup

England– The Three Lions will not feature with their golden generation but have one of the strongest ever side heading to the Euro 2020. The injury of Trent Alexander-Arnold in the 1-0 win against Austria, who was a significant threat, could hurt Gareth Southgate in terms of creativity going forward. Still, the huge talent in the right-back position is the least of their worries. Although England has endured more than fifty years of hurt, this campaign looks as promising as the World Cup, where they finished fourth. However, Southgate needs to forego the good publicity and be ruthless with his team to push them to their limits. Harry Kane managed thirty-three goals in forty-nine appearances, winning the Premier League’s Golden Boot with twenty-three goal and topping the assist charts with fourteen. He is a serious threat in front of goal and could be the man to take England all the way if the players around him can serve him well. The final will be held at Wembley, which could be a chance for optimism, especially with the return of fans. The young talent Mason Mount has proven himself as a big-game player as he did in Chelsea’s Champions League triumph campaign, even assisting the only goal in the final. England don’t have the easiest of groups, Croatia (matchday 1) and the Czech Republic (matchday 3) are likely to prove tough opponents, and they also have to face bitter rivals Scotland in between those two games. Manager Gareth Southgate has stated that anything less than the semi-finals would be a failure, but if England does win their group, they face the runners-up of Group F, which includes France, Germany or Portugal.

Portugal– boast a well-balanced team blending experience and youthful energy, which could be the perfect brew for success. The winning mentality of Cristiano Ronaldo surrounded by huge creative talents such as Joao Felix, Bruno Fernandes and Bernado Silva. Ronaldo is the Serie A top scorer netting twenty-nine goals despite being thirty-six years of age. The defending Champions with their exciting squad are in the group of death alongside France, who they beat in the Euro 2016 finals, Germany and Hungary. The defence could be their biggest strength featuring FWA men’s player of the year Ruben Dias, Pepe, Dortmund’s Raphael Guerreiro, and Joao Cancelo. The bench is graced by new star Pedro Goncalves, who has 23 goals in 32 appearances for Sporting Lisbon. The manner of their win in the previous tournament was scrapping draws, and one goal margin wins on their road to victory. It wasn’t pretty at times, but it was effective. Underestimate Portugal at your peril; they also picked up the inaugural UEFA Nations League, which shows how dangerous the Portugal squad is.

Players to watch: Cristiano at 36 still toped the Serie A goal tally

Belgium– The world number one team is one of the favourites to win silverware as their Golden generation comes to an end. All they have to show for a wave of remarkable players over recent years is a third-place finish in the World Cup; the Euro 2020 is a clear shot for their first-ever trophy. Romelu Lukaku and Kevin De Bruyne are two players every manager would want in their squad. Lukaku led Inter Milan to end Juventus dominance of the Italian league scoring twenty-four goals. De Bruyne was instrumental in Manchester City’s campaign, winning the Premier League and the Carabao Cup but lost in the Champions League final. Captain Eden Hazard has had an indifferent season in Spain, struggling with injury, managing just four goals in the entirety of the season. We are approaching the end of the Golden era with Vincent Kompany already gone; Thomas Vertonghen and Toby Alderweireld could follow him. Hazard is thirty years and could have legs for maybe just one more tournament, so it’s high time they grace this talent with a trophy. Finally, goalkeeper Thibaut Courtois has been in splendid form after having a shaky start to life in Spain. He will be the best man with gloves and could keep them in a tournament where the margins are narrow.

Players to watch: Romelu Lukaku led his team to the Serie A title

Spain– A new era for the Spanish national team under Luis Enrique as he has axed some big names such as Sergio Ramos for the competition. They are blessed with a winning DNA in this competition, conquering both the 2008 and 2012 tournament. La Roja aims to make up for the 2018 World Cup disappointing show in a competition they are the most successful side with three trophies alongside Germany. Both two sides will be fielding new squads and most likely use this as a tournament to build cohesion but take nothing from the talent in the side. Aymeric Laporte, who switched allegiances to Spain from France, is an interesting addition to the squad that looks promising to challenge titles. Spain has failed to progress past the last sixteen since they won the Euros in 2012. The weight of their success lies on the shoulders of Alvaro Morata, who will have to step up to marshal the side. The task might be too big for him, but how Spain plays tactical tiki-taka football raises the prospect for him to have many clear-cut chances for him to score. The experience of their manager Luiz Enrique could play a part, and they could well be the dark horse of the tournament.

Players to watch: Aymeric Laporte has a lot to prove in this tournament.

Tournament Changes Due to Covid-19

This year’s Euro tournament was delayed for a year due to the coronavirus pandemic. Although vaccine roll-out is going well in the UK, the threat of the virus, especially new variations, make it likely that players will test positive for the virus, and outbreaks are a possibility.

As a result, UEFA has introduced special rules that apply during this tournament; they are as follows; On May 4 2021, the UEFA Executive Committee approved special rules for the final tournament due to the COVID-19 pandemic in Europe:

The Euro 2020 tournament starts next Friday, June 11. All Euro 2020 games will be screened on terrestrial tv. The first game on Friday is between Turkey & Italy and will kick-off at 20:00 on BBC One. 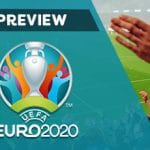