England won the Cricket World Cup in what can only be described in amazing fashion. The game was decided after a Super Over by the fact England had recorded more boundaries than New Zealand. It was an amazing display of the sport and surely won many hearts and minds of those watching.

Early Sunday, the stage was set, Lord’s was packed and the two teams set out to win the trophy. Few could have predicted what followed. It what can arguably be described as the greatest cricket match of all time, England and New Zealand finished level on 241 runs after 50 overs. In the following Super Over, both teams finished with 15, and England were declared champs as they had scored more boundaries.

To even get to that stage an innumerable amount of improbable events took place, and the left the raucous crowd an emotional wreck! In the last over alone, England needed to hit 15 and were aided by a ball that ricocheted off Stokes’ flying bet and went for four. This left them needing two off the last ball to win, instead, they got 1 as Mark Wood was run out trying to get his second.

In the Super Over, England, under the guise of Stoke and Buttler hit a heady 15. Due to Super Over rules, this meant New Zealand needed 16, as a tie would leave them short as the scored fewer boundaries. Jofra Archer set up to bowl, and New Zealand replied with 15. The final Guptill dived to make an extra run but was short as Buttler run him out. Wild celebrations ensued and England were confirmed as winners of the tournament for the first time in their history. After being knocked out in the first round last time, this was everything England could have hoped for.

Back from the brink

At one point in this tournament, it seemed highly unlikely that England would get to the semi-finals, nevermind any further. One more defeat in the group stages and that would have been the end. Yet, the team showed they can battle against adversity in spectacular fashion. They destroyed Australia in the semi-final, and Stokes saved England in the final.

When New Zealand set a target of 242 to win, everyone thought it was an achievable sum, yet England looked doomed when they fell to 86-4. Stokes and Buttler stepped up, and by the time Buttler was out they needed 46 from 31 balls. Then came the remarkable passage of play. Stokes was carried over the boundary for six, and then the ricochet and the Super Over.

After the game, New Zealand were shell-shocked, whilst the England players found it hard to sum up the events with words. It was an incredible occasion and a match that will live long in cricketing folklore. It was a shame that there had to be a loser, and with the teams finishing so even too. It must hurt being a New Zealand fan right now, but that won’t matter a bit to the England fans and team who celebrated long into the night!

Wow! It’s hard to sum it up. What a day, what a tournament. Everyone has done everything asked of them. We have performed under pressure. It was almost written in the stars for Ben Stokes. He’s had such a tough time. I’m so proud of him and pleased for him and his family.– Joe Root, England. 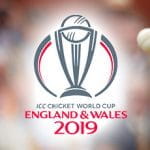