England have been crowned Under-17 World Cup winners after a dramatic match in Kolkata in India. The young lions fought back from 2-0 down to thrash Spain and become the new world champions. This astonishing victory means England are holders of both the under-20 and under-17 World Cup titles.

England had never progressed beyond the quarter-finals stage in this competition and when Spain scored two early goals it looked like the day would end in disappointment for the English youngsters.

The under 17’s team become the pride of England after winning the World Cup against Spain in Kolkata, India.

Two well taken goals by Barcelona’s Sergio Gomez put Spain firmly in the driving seat and it was a true test of character that the youngsters’ heads didn’t drop after conceding the second on 30 minutes. England had lost to Spain in the European Championship final on penalties in May this year, so it would have been understandable if doubts were creeping into the English players’ minds.

The first Spanish goal on ten minutes had a big suspicion of offside about it. Gomez looked as if he was quite a distance behind the England defensive line but the goal was allowed to stand.

There was no such doubt for Spain’s second though, as a nicely taken shot by Gomez went across the England keeper and finds the top corner.

Liverpool striker, Rhian Brewster, was once again instrumental in driving England forward and his goal in the dying seconds of the first half was the catalyst that produced a simply sublime second half performance by the young lions.

England Pile Pressure on the Spanish

With Spain sitting back, England were invited to push forward and it was this attacking flair that led to the equalising goal in the 58th minute.

Man of the Match, Phil Foden, played a delightful ball to find Ryan Sessegnon running behind the Spanish defence. Sessegnon’s shot found Morgan Gibbs-White just a few yards out and the Wolverhampton Wanderers midfielder made no mistakes and levelled the game.

Foden was proving a constant thorn in the side for the Spanish and it was the Manchester City star who gave England a much-deserved lead in the 70th minute. Hudson-Odi charged down the left and his cross left Foden with a simple tap-in.

Despite Spain looking dangerous on occasions, the English defence was holding firm. With Spain forced to attack, it left them vulnerable on the counter as tiredness set in. And this would prove to be the case when defender Marc Guehi poked the ball in to make it 4-2.

The rout was completed by Foden in the 88th minute when he latched onto a Hudson-Odi ball, showing great control to steer it through the goalkeeper. The World Cup was England’s and the under 17 crown is added to the under 20 title won in June this year.

The Next Generation of English Stars

Rhian finished the tournament as the golden boot winner and has turned many heads with his goal-scoring exploits. Scoring a hat-trick against the USA in the quarter-finals was one thing but repeating the feat against the much-fancied Brazilians in the semi-finals was another.

Despite not yet starting a game for Liverpool, he was named as a substitute in the game against Crystal Palace last season. Manager Klopp is well aware of Brewster’s exciting potential and revealed that he had called Brewster whilst he on England duty and Klopp told him to “save his number”.

Even before this tournament, Foden was tipped for greatness and his performances haven’t gone un-noticed by manager, Pep Guardiola, who has described Foden as a “gift”. Guardiola even hinted that he could be soon playing:

That guy will grow and play in a World Cup in the future. Now he has lived that situation and knows what he has to do. In which position did he play to score two goals? When he comes back we will put him in this position. He scores two goals in the final!– Pep Guardiola, Manchester City manager

Pre-season, Foden played in the Manchester City team that faced rivals United. Despite City losing 2-0 in that game, Guardiola described Foden’s performance as ‘special’ and hinted that if not for his participation at the World Cup, Foden would have been playing a part in City’s domestic campaign already. 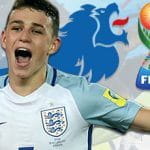