England’s World Cup dreams are over as the young and inexperienced team struggled to match Croatia’s experience and energy. Gareth Southgate’s men finished the game with 10 men after Kieran Trippier was forced off with an injury in extra-time.

Croatia silenced the Three Lion’s roar to end England’s World Cup campaign. The 32-year old Croatian Mario Mandžukić scored a 109th-minute winner to book a date with France for the finals that will be held at the Luzhniki Stadium in Moscow on Sunday.

England took the lead first in the fifth minute through Kieran Trippier who curled a superb free-kick into the top corner to beat Croatian Keeper, Danijel Subašić.

The Three Lions had numerous chances to increase their tally; one came through Harry Kane who shot weakly at the keeper and hit the rebound against the post, when a simple ball to Sterling looked a better option. Jesse Lingard, who has been impressive throughout the tournament, hit wide with a shot that would have crept in with more bend and Raheem Sterling was a constant threat for the Croatian backline.

England’s hopes of securing their first World Cup trophy since 1966 are over. A goal from Croatia deep into extra-time was enough for the victory and to send England crashing out of the competition.

England started the second half with a more defensive mentality and looked comfortable with the early lead which lasted 63 minutes.

Ivan Perišić equalised in the 68th minute. The midfielder, who plays for Internazionale, was perhaps fortunate that the goal stood as his boot was higher than Kyle Walker’s head as they tussled for the ball. More often than not this would have been deemed as dangerous play. The 29-year-old looked nervously at the referee as he celebrated but the goal was allowed to stand. Three minutes later Perišić came close to giving Croatia the lead when his shot cannoned against the woodwork with Jordan Pickford beaten. Fortunately for England the ball bounced back into play.

In extra-time, England came close through captain Kane but his headed shot was off target. John Stones also went agonisingly close; his header from a corner kick was cleared off the line by Atletico Madrid’s right back Šime Vrsaljko. Vrsaljko was impressive on the night and the 26-year-old was the creator of the first Croatian goal.

Croatia have proved themselves as one of the teams of the tournament. While they do not have many well-known superstars, the players do possess quality, fighting spirit, persistence, and endurance. In all Croatia’s knockout matches they have needed extra time to progress and they came from behind in their knockout matches against Denmark, Russia and now against England. The talent in midfield is their best strength with Barcelona’s Ivan Rakitić and Real Madrid’s Luka Modrić forming a formidable duo.

The Three Lions will now face Belgium for the second time in Russia in the third place play-off. This takes place at 3pm on Saturday at the 65,000-capacity Saint Petersburg Stadium. The two teams were in the same group and Belgium beat England 1-0 in the group stage and finished as group winners. Neither team is likely to want to play this fixture with the new football season a month away; we can expect to see squad players given time on the pitch.

France to face Croatia in the final

In the other semi-final that was played on Tuesday, France beat Belgium to become the first team into the 2018 FIFA World Cup finals.

Barcelona centre-back Samuel Umtiti scored the only goal in the fifty-first minute from an Antoine Griezmann corner kick.

Axel Witsel almost beat Hugo Lloris with a long-range shot and Toby Alderweireld’s shot was saved by his Spurs teammate allowing the 1998 champions to keep a clean sheet on the night.

Belgium boasted 64% possession with France playing on the counter-attack with youngster Kylian Mbappé always looking dangerous with his lightning speed.

Roberto Martinez tactical astuteness that was so good against five-time World Champions Brazil didn’t do the trick against a well-organized France team. Yannick Ferreira Carrasco did not start in his usual left-wing back position meaning that when Belgium was forced to defend, their captain Eden Hazard had to play in that role, removing much of his threat.

France dominated the midfield with the industrious N’golo Kante doing his usual tireless work. Manchester United’s Paul Pogba had a good game, using his skill, strength and speed and was able to orchestrate many of the French attacks. 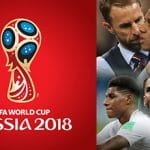