England’s women progressed to the quarter-finals of the Women World Cup with a commanding 3 – 0 win against Cameroon in Valenciennes. The success means that the three Lionesses have reached at least the quarter-finals in each of their last five WC appearances.

Up against a side that is 43 places below them in the FIFA World Ranking, England was impressive, securing a third clean sheet in their fifth consecutive win in the tournament. A winning run that goes way back to the 2015 World Cup third playoff match.

In a match where everything but football took centre stage, there was barely four minutes on the clock when the game’s first significant incident took place. Cameroon’s Yvonne Leuko elbowed youngster Nikita Parris in the face. It was surprising that VAR wasn’t consulted as it was a potential red card offence, but the incident was not reviewed with the defender escaping with just a yellow card.

The Lionesses opened the scoring in the 14th minute through their captain, Steph Houghton, powering in an indirect freekick, with the entire Cameroon 11 on the goal line, following Augustine Ejangue’s back pass. It was a great effort as the Manchester City star had such a small target to aim for. Incredibly, England have scored in the 14th minute in three of the four games they have played so far.

Another potential sending off offence took place straight after the goal when Augustine Ejangue appeared to spit on Toni Duggan’s arm (who was leading the protests for back pass). The Norwegian based defender was lucky the incident wasn’t spotted.

On the stroke of half time, England doubled their lead. Ellen White finished a perfect ball from Lucy Bronze. The referee initially disallowed the goal for offside, prompting a VAR review that reversed the call on the field and the goal did count.

The Cameroon players protested the decision furiously, suggesting that the big screen in the stadium suggested Parris was on an offside position, although replays indicated she didn’t interfere with play. The players’ protests to the Chinese referee took about three minutes, with the payers unwilling to restart the match. It took the intervention of FIFA officials during half time to try to manage the situation as Cameroon’s anger against the VAR and referee’s calls.

Cameroon, who were just making their second World Cup appearance, thought they had scored early in the second half. Ajara Nchout converted Gabrielle Onguene’s cross, only for the goal to be disallowed. It was a very close, tight offside call and was made upon a VAR review. This decision created more furore, especially from the technical bench, led by their coach Alain Djeumfa. Nchout cried openly in what was one of the most passionate scenes so far, in the World Cup in France.

England left-back, Alex Greenwood, sealed the win from a well-worked training ground routine corner kick by Toni Duggan. A late challenge by Takounda on Houghton could have resulted in a red card and summed up England’s frustrations with the referee, Liang Qin.

Ellen White’s goal in the first half was her fourth goal of the tournament, this is the joint record of the most goals, by an England player, in a single tournament. She now sits alongside Kelly Smith, who managed four in 2007.

England manager, Phil Neville was scathing of the behaviour of the Cameroon players, stating he was “ashamed”. The 42-year old said that players reflect their coach, and if any of his players acted in such a manner, they would never play for him ever again.

Neville’s team are 4th favourites to win this years’ tournament. The next huddle for the England team is against Norway on Thursday 27th June in Le Havre. 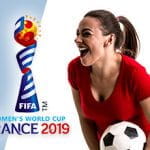