The Czech Republic kept up their astonishing record in Fed Cup finals by beating the reigning champions the United States with two games to spare. Katerina Siniakova beat Sofia Kenin to give the Czechs an incontestable 3-0 lead in the best-of-five final.

The Czech Republic maintained their 100% record in Fed Cup Finals to clinch the trophy. The Czechs have been in six finals and have won in those finals six times. The win against America means the Czech Republic have won the event for the sixth time in eight years.

Katerina Siniakova beat Sofia Kenin to give the Czechs an incontestable 3-0 lead in the best-of-five final. The Czechs have now won the title six times in eight years.

An emotional Katerina Siniakova was the Czech Republic’s hero as she saved two match points before overcoming Sofia Kenin 7-5 5-7 7-5 in an epic encountered that lasted almost four hours. The 22-year-old French Open and Wimbledon women’s doubles champion was made to work hard for the victory by 20-year-old Kenin. The youngster who only turned professional last year, wasted two golden chances to win the match. At 5-4 in the final set, the American could have won the tie but pulled her forehand wide and squandered the chance. This allowed the Czech back into the game and ended the American team’s hopes of being the first team to come back from a 2-0 losing position in the Fed Cup final.

Both teams were missing key players with the American team was particularly hit by the absence of Madison Keys. The 23-year old has a career win rate of 64.6% and was instrumental in helping the USA reach the final. The former world number 7 seed scored the decisive point in the 3-1 win over France in the semi-finals. 2017 US Open winner Sloane Stephens was also ruled out along with the immense talent of Serena and Venus Williams. 48th ranked Sofia Kenin and 65th ranked Alison Riske played in the final, an indication of how badly the Americans were injury hit.

The Czechs had selection problems of their own. Three-time Fed Cup winner and former world number 1 Karolína Plíšková was out along with two-time Wimbledon winner Petra Kvitová. The 28-year-old has 25 career titles to her name but suffered calf muscle and wrist injuries in the loss to fellow American Sloane Stephens in the WTA Finals in Singapore. Kvitová’s replacement was 22-year-old Barbora Krejčíková who has a lowly singles ranking of 200. Plíšková was replaced by the already selected Kateřina Siniaková.

Match winner Siniakova described winning the Fed Cup as an incredible feeling and admitted that nerves at times got the better of her, almost allowing the Americans a way back into contention. The youngster paid tribute to the home crowd, saying their support was “felt”.

America’s captain, Kathy Rinaldi was upbeat despite the loss. The former top ten player who retired in September 1997 said she was proud of her team and expressed gratitude that her players had given everything for her. 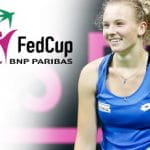