Underwater search and rescue operators have located the plane that was carrying footballer Emiliano Sala. Authorities have confirmed that one body has been spotted within the wreckage.

On Sunday, the UK Air Accident Investigation Branch (AAIB) searched an area of interest together with Blue Water Recoveries Ltd. Sonar equipment then identified an object laying on the seabed. Using a remote operated underwater vehicle, it was then determined that the object was indeed the wreckage of the missing plane.

The find was confirmed by David Mearns on Sunday afternoon, with the plane’s registration number visible on video sent back from the remote controlled submarine.

The wreckage of the plane that Sala travelled on was located at the weekend.

The wreckage was mostly intact and the teams are now determining which steps to take next, together with the families and the police.

However, while families still hang on to some hope, the footage taken by the remote operated vehicle showed that one body is visible in the plane’s wreckage, according to a statement from the AAIB:

The ROV carried out a further search of the area overnight, but did not identify any additional pieces of wreckage. Tragically, in video footage from the ROV, one occupant is visible amidst the wreckage. The image shows the rear left side of the fuselage including part of the aircraft registration. We intend to publish an interim report within one month of the accident occurring.–Statement, Air Accident Investigation Branch

The family of Emiliano Sala are said to want the plane to be brought to the surface. However, that may be difficult. The search also involved Geo Ocean III andd FPV Morven, who supplied much of the specialist equipment needed to conduct the search. Currently, Geo Ocean III are only commissioned for two more days, during which time it would be difficult to recover the plane.

The search has been made possible thanks to a campaign that has raised over £260,000. A number of fellow professional footballers donated, including PSG’s Kylian Mbappe, who donated $34,000 to the campaign.

Over the weekend, Sala’s old club Nantes and his intended club Cardiff City continued to show tributes to the forward. Cardiff won their game against Bournemouth 2-0. 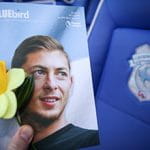