The Champions League final this Saturday is a battle of Britain with Manchester City taking on Premier League rivals Chelsea. Pep Guardiola could deliver a treble, with the Premier League and the League Cup already in the bag. For Chelsea, this is their only chance of silverware, having already lost in the FA Cup final this year.

Triumph Would Be Mission Accomplished For Guardiola

Since taking over the reins at Manchester City in 2016, the Champions League is the only one missing. In his five years, he’s picked up three Premier League titles, an FA Cup, four League Cups, and a couple of Charity Shield wins. Yet despite this success, it’s this trophy that City owner Mansour bin Zayed Al Nahyan wants badly, guaranteeing that City is among the elites.

It’s already been an incredible season for City. However, a slow start in the league saw them drop early points against Leicester (2-5), Leeds (1-1), West Ham (1-1), Liverpool (1-1), Manchester United (0-0) and West Brom (1-1). This slow start meant much of the attention was on various clubs that led the table, including Chelsea, Liverpool, Manchester United, and Tottenham.

City then went on a fifteen match winning streak, which was finally ended by neighbours United at the Etihad at the beginning of March. By that time, it was only a matter of time before they clinched the title. Although understandably, standards drop in the league when the title is decided, City fans will be perhaps concerned over recent form. The three defeats in seven games at the end of the season is as many as they lost in the previous thirty-one.

Can Tuchel Take Chelsea To The Next Level?

One of the season’s stories is the very fact that Chelsea is challenging for the Champions League trophy. Looking devoid of ideas early in the season, Roman Abramovich’s risky decision to ditch club legend Frank Lampard and go for Thomas Tuchel has paid incredible dividends. Chelsea could be just a couple of days away from claiming the biggest prize in club football.

Quickly adapting to the Premier League, Tuchel went 14 games before tasting defeat. A leaky defence was soon galvanised, and the Blues would only concede thirteen goals in his first twenty-seven games. A season that looked heading for disaster was turned on its head with Chelsea in the top four, an FA Cup final and a Champions League final versus City.

Chelsea negotiated a potentially tricky first knockout round against Atletico Madrid; a 1-0 win in the first leg was pivotal in a 3-0 aggregate win. They beat Porto by the same scoreline in the next round. Their Champions League chances looked finely balanced in the semi-finals after a 1-1 draw in the first leg, but goals from Timo Werner and Mason Mount saw them past Real Madrid.

Chelsea, much like City, don’t go into this game in the best of form. Since beating City in the league game between them at the beginning of May, Chelsea has lost three out of four games. One of those losses was in the FA Cup final, in which Leicester took the trophy with a 2-1 win.

The Blues are lucky that their hopes of a Champions League spot don’t rest on this game. They lost 2-1 to Aston Villa on the last day of the Premier League campaign. However, Leicester also lost, meaning a top-four place was guaranteed before this final.

Players to watch: – Mason Mount is developing into an incredible player, and it wouldn’t be a surprise to see the 22-year-old on the scoresheet. 4/1 seems good value. Timo Werner also seems worth a shout @ 3/1, he could yet become a hero after an indifferent season.

As there is no pressure on this fixture for Chelsea, that might suit the Blues. At 7/2, they are underdogs but have a great recent record against their opponents. City @ 17/20 is heavily favoured, but they also have the pressure of this being their first-ever Champions League final. A draw @ 12/5 is also worth considering.

The Champions League final between Manchester City and Chelsea will be shown on BT Sport 1. Kick-off is at 20:00. 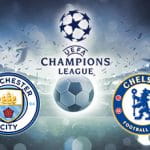