The Premier League can proudly boast at having the greatest number of teams in the knockout phase of the Champions League. However, the draw has been kinder to some than others.

The draw for the last 16 of the Champions League sees tricky ties for Liverpool, Manchester United and Tottenham. Liverpool face Bayern München while PSG are the opponents for Manchester United, with Tottenham facing Borussia Dortmund. City face German side Schalke 04.

Liverpool vs Bayern Munich– It’s a tale of ‘out of the frying pan into the fire’ for the Reds. They survived a group scare to secure qualification, saved by a moment of Mohammed Salah’s magic against Napoli, only to be pitted with Bayern Munich. The Premier League leaders are being touted as favourites due to their current form. The Merseyside team lost last years’ final and last won the competition in 2005.

The German Champions have not been in their best form this season, struggling in the Bundesliga by their standards and sit third. The Germans have a great deal of experience and quality within their ranks with game changers in Arjen Robben, Robert Lewandowski, and Frank Ribery. The biggest question mark over the five-times winners and five-times runners-up is how will their old defensive line match the pace and blistering dynamism of the Liverpool side. Lewandowski is the leading top scorer with five goals in six group stage matches and 22 goals in 22 games in all competitions so far this season. The former Borussia Dortmund manager understands perfectly the challenge his side are up against, deeming the match as ‘difficult.’ He has faced Bayern 29 times as a manager – winning 8, drawing 5, and losing 16.

Manchester United vs Paris Saint Germain – Manchester United have endured a testing campaign. They are 19 points off the pace in the Premier League and have just sacked José Mourinho as their manager. They have a leaky defence that has conceded more goals than 19th placed Huddersfield, which is worrying, as they will face a real attacking threat in the trio of Cavani, Neymar, and Mbappe. Ole Gunnar Solskjær will be making his Manchester United Champions League managerial debut in this fixture.

PSG are hungry to complement their domestic dictatorship with European glory. The Young Player of the Year, Kylian Mbappe has 4 assists in the tournament with Neymar being the player who has created more chances (18) and has completed the most dribbles (32) in the group stage. Like United, PSG are also suspect at the back, they conceded 9 goals in 6 group matches.

Tottenham vs Borussia Dortmund – This is a fair matchup between two sides who have had a flying start to the season – Spurs with their best ever start in the Premier League while Dortmund top the Bundesliga. Mauricio Pochettino is a relieved man, having seen his side sneak through a testing group that went down to the last day to qualify by drawing at the Camp Nou.

Jadon Sancho lines up against his Three Lions teammates with seven assists in the Bundesliga. Paco Alcacer is the German Leagues top scorer with eleven goals, despite often starting off the bench. He is averaging a goal every 40 minutes, which is an incredible strike rate. Dortmund had the best defence in the group stage, conceding just two goals.

Schalke 04 vs Manchester City – Manchester City will be looking at Pep Guardiola to mastermind a deep run to the competition and match his success at Barcelona to clinch a first Champions League trophy for the English Champions. Leroy Sané reunites with his former side and by the time the games are played Agüero, De Bruyne, and Silva will be expected to be back to full fitness from injury.

Schalke have just won four league matches in the league and currently sit in 13th position. Goals could well be a problem for the German team. Just 8.1% of their shots per goal found the net, the worst conversion rate by any of the teams in the group stage. On paper at least, this looks like the most straightforward match for the English contingent.

Ajax vs Real Madrid – Santiago Solari understands the pressure on his shoulders to match Zinedine Zidane’s success with the reigning European Champions. Real Madrid were talked down at this time last year as potential challengers but went ahead to win the competition.

Olympique Lyon vs FC Barcelona – Lyon have an unenviable task to shackle Lionel Messi. Barcelona would be wary of the threat the French pose as they managed to beat Man City at the Etihad and drew with them at home. In terms of depth and talent, the Catalans should seal this deal.

Atletico Madrid vs Juventus – Cristiano Ronaldo’s Juventus will have a defensive face off with Atletico Madrid. The first real test for the Portuguese man, who was acquired to bring European success for the Italian giants, will also seek the sixth Champions League trophy of his Industrious career. Atletico have some big names in their ranks with Antoine Griezmann always posing a threat. 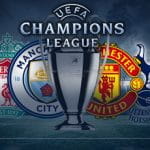