Australia and South Korea through to Asian Cup quarter finals

Pre-tournament favourites South Korea and holders Australia have made it through to the quarter finals of the Asian Cup. Both teams will play on Friday, with the other two quarter final matches taking place on Thursday.

Thursday will see Vietnam play Japan, followed by China versus Iran. Both Japan and Iran are heavy favourites for those games.

Australia will face hosts the UAE on Friday.

Australia and South Korea fail to win in normal time

South Korea needed extra time to see off Bahrain. The favourites for the tournament led through a first half goal from Hwang Hee-chan, but despite controlling possession, they conceded many shots and chances. Bahrain were able to capitalise with a 77th minute goal from Mohamed Al Rohaihi.

South Korea pushed for the equaliser in the first half of extra time – in which Bahrain’s goalkeeper had to be substituted due to injury – and found it in stoppage time. A pinpoint cross from the right was met with a header from Kim Jin Su.

South Korea then hit the post in the opening minutes of the second half but it didn’t matter, the one goal was enough to see the favourites through to face Qatar.

Australia have been anything but clinical so far in the tournament and will face the hosts, the UAE, who could easily cause an upset.

The Socceroos lost the opening game of their title defence to Jordan and only just assured qualification from the group in the last seconds of their final match, with a 3-2 win over Syria, thanks to a 93rd minute Tom Rogic goal.

Australia were then equally unimpressive in their first knock-out match. It took a penalty shoot-out to separate them and Uzbekistan after a goalless draw. Goalkeeper Matt Ryan proved the hero, saving two penalties, as Australia went on to win 4-2.

Opponents UAE are unbeaten so far, but did draw two of their group matches, against Thailand and Bahrain. Their last 16 match against Kyrgyzstan was also level after 90 minutes, but an extra-time penalty was enough to avoid a shoot-out and send the UAE through. 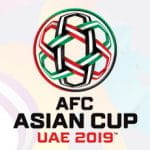