28-year old Patrick Reed won the 2018 Masters by one shot over fellow American Rickie Fowler. Victory gives the American his first major title. Northern Ireland’s Rory McIlroy was unable to complete his Grand Slam of major titles, finishing +2 for the tournament and tied for fifth place.

World number 24, Patrick Reed, produced a shock at Augusta to win the 2018 Masters. Rounds of 69, 66 and 67 had placed the American in the driving seat for the final day of action. His final round score of 71 was just enough to see off a spirited challenge from Rickie Fowler. Jordan Spieth finished third on -13 to make it an American 1,2,3.

Patrick Reed is perhaps better known for his troubled background than being a contender to win the Masters. A child prodigy, his career has been blighted with reports of drunken arrests, bitter family disputes and allegations of cheating.

World number 24 Patrick Reed was the surprise winner of the 2018 Masters. The 28-year-old had to keep his nerve to hold off challenges from Fowler and Spieth to claim his first ever major title.

But the Texan played with a reassurance in the early rounds of play and secured enough of a lead to ward off a late challenge by Rickie Fowler and former number one Jordan Spieth to secure the title. He may not have been the most popular on the course, as many had come to witness what they thought would be a routine Rory McIlroy win, but over the four rounds he was certainly the most consistent.

Even going into the last day, few expected Reed to hold onto the lead. Rory McIlroy would have been the player most looked to if Reed made any sort of slip up. McIlroy needed the Masters title to complete his Grand Slam of titles and take a seat with players such as Jack Nicklaus, Tiger Woods and Gary Player in the halls of golfing greatness.

The conditions of the course were perfect for McIlroy. Rain had been falling at Augusta and the damp conditions suited the 28-year old’s style of play. The majority of Rory’s majors have been won at courses that had softer greens than normal. The Augusta course is tailormade for his long drives and lofty irons which allow him to exploit one of his key strengths which is his short game.

When the game is going well for McIlroy, there are few better in the sport but there is often a suspicion that McIlroy’s head drops quickly when things are not going so well. And whilst Reed didn’t have the best of last days (72 was his worst score of the tournament), it was simply a case that Reed handled the pressure better than McIlroy did.

By the 11th hole you could sense that Rory felt it wasn’t his day and wanted the experience to be over with. After missing the 11th green he hurriedly took his chip shot when a calmer approach would have been his usual tactic. In the back nine Rory faded badly and scored just the one birdie and two bogeys.

Perhaps the expectations were too much. Historically Augusta hasn’t been the best of courses for the Northern Irelander. His best ever round at the course was a 65 in round one of the 2010 Masters, while scores of 70 are much more common for the world number seven. Hopefully for UK golfing fans he will improve in time for the US Open, a tournament he has won before.

As for Patrick Reed, his victory at the Masters has put him on the cusp of a top ten ranking. Reed’s famous victory has elevated him to eleventh place in the rankings. A decent showing at the US Open could see him break the top ten for the first time. 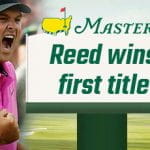