Curtain Goes Down on Formula One Season

This weekend sees the finale of the Formula One season with the Abu Dhabi Grand Prix. Lewis Hamilton has already taken the title with ease, second place is already Sebastian Vettel’s but far from a dull affair, all eyes are likely to be on Max Verstappen.

With the title already clinched with a massive point difference of 81 points, there is just one race left for the Formula One season. This weekend the tenth Abu Dhabi Grand Prix takes place and is one of the biggest events in the United Arab Emirates calendar. The event is a real spectacle that offers fans more than Formula One racing but an embracing of Western culture for concerts by Post Malone, The Weekend, Sam Smith, and Guns N’ Roses coinciding with the action.

The Abu Dhabi Grand Prix is the last race of the season. With the Championship already Lewis Hamilton’s, it’s all about a statement of intent for next year.

Last year, Mercedes Valtteri Bottas conquered the Yas Marina Circuit with fellow teammate Hamilton, who won the 2017 Formula One Championship, coming second in a show of dominance by the Mercedes team. The Finnish born driver is yet to win this year, finishing second on the podium 11 times. A win here over the 55 laps of the 5.5Km course would give a much-needed morale boost for the 29-year-old.

The biggest talking point of this race is likely to feature Max Verstappen. Verstappen is still bitter over the much-publicised event at the Brazilian Grand Prix. The Dutchman was heading for a third win of the season when Frenchman, Esteban Ocon collided with Verstappen and sent both drivers into a spin. Although Verstappen managed to finish second, the Red Bull driver ironically saw red and pushed the Frenchman, an act that saw him ordered to complete two days of community service as punishment.

If early practice sessions are any indication of what to expect then Verstappen is showing he means business. In the first practise session, the Dutchman was head of the field, his time of 1:39.287 was over a second faster than Lewis Hamilton in second.

Lewis Hamilton is likely to want to cap a remarkable year with a win. The Briton took a great leap into Formula One immortality by winning the fifth World title of his career. The Championship win was achieved against a backdrop of the kaleidoscopic colour of the Mexican Grand Prix. The 33-year-old’s race was a drive of poise and maturity, finishing fourth which earnt twelve crucial points that were enough to guarantee the 2018 series with 383 points.

For the second year running Hamilton didn’t clinch the title, he would have liked. Last year he wrapped up the ultimate prize by finishing a distant ninth at the Autodromo Hermanos Rodriguez race track which is the same venue as this year’s crowning. So while not the most successful of tracks for the Brit, it is one he normally leaves with good memories.

The 33-year-old has now left Alain Prost and Sebastian Vettel on four wins and joins the legendary Juan Manuel ‘El Maestro’Fangio on five. At just 33-years old, the newly crowned World Champion is within the range to surpass Schumacher’s record of seven that would record him as the greatest driver in the history of the sport. 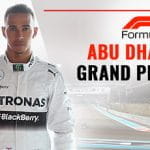