They did it again! England’s victory against Sweden on Saturday has sent the Three Lions into their first World Cup semi-final in 28 years.

Not only did England win, but they made it look somewhat easy. Aside from a couple of heroic saves from Jordan Pickford England never really looked too troubled and their passage into the semi-final was free from drama, unlike opponents Croatia.

Neutrals will perhaps be looking at the other side on the draw more longingly. France play Belgium in what could be a cracking semi-final and many expect the winner of that to go all the way.

Penalties weren’t needed this time as England comfortably knocked out Sweden in the quarter-finals. The Swedes were a little disappointing but England should be credited with not allowing them the time and space to really get going. Croatia needed penalties for the second time in a row to get past hosts Russia and having played 240 minutes of football and two penalty shoot-outs in the last week, fatigue could become an issue for Croatia.

As the dust settles, throats dry from verse after verse of ‘it’s coming home’ recover and hangovers disappear, England players and fans alike can look forward to doing it all over again on Wednesday night. Not since 1990 have England been in a World Cup semi-final: Almost 30 years of hurt.

After the arduos and bitterly fought match that was Colombia, England found things much more straight-forward against Sweden on Saturday. Sweden’s game plan was clear even before kick-off, but that didn’t make it easy to stop it coming off. Nevertheless, England defended resolutely and controlled the game. Even more goals came from set-pieces, which is particularly encouraging since Sweden are the tallest team in the competition and known for strong defending.

Croatia are a better team though and this is a much different sort of challenge. England’s midfield – much praised so far – will have a difficult time trying to stamp their authority on the match, facing perhaps the world’s best collection of midfielders. But attempt to control the game they must. Both of Croatia’s knock-out matches have headed into extra-time and fatigue – both mental and physical – could be a factor for them. Chasing the ball and defending crosses and set-pieces will become very tiresome and England know there lies their biggest chance of success. Whatever the outcome, the boys have already done themselves proud, but England are going into this semi-final as favourites. We’re now just two games away from it coming home.

Croatia were the standout team of the group stages and have managed to reach their first semi-final since France 1998. The performances have taken somewhat of a downturn since then, but there is no doubt that this Croatia team is deserving of a place at this stage.

That downturn in performances cannot be ignored though. Croatia have struggled in both their knock out matches so far. In both the draw with Denmark and a draw against hosts Russia Croatia did not really play well enough to have deserved a straight victory and both were followed by penalty shootouts. Obviously, Croatia won both of those, but the fact that the team has twice played 120 minutes followed by a penalty shootout leads to the question; how sharp will their players be? While many players were rested for the inconsequential third group match, the team has otherwise been largely unchanged. That said, these players will be just as up for this one as England. Little more needs to be said about the quality of Croatia’s midfield. Modrić and Rakitić will look to control this and feed Mario Mandžukić, who is also in great scoring form. Defensively, there are known weaknesses. England may target Dejan Lovren, who is known for making a mistake or two.

Prediction: England to qualify – We dare to believe! England’s threat from set-pieces and crosses will eventually prevail again, while the assured defence will do a job of stifling what could be a tired Croatia team.

As excited as we are for England’s match, there is also a sense of sadness in the air. As we’re at the semi-final stage, there’s just one other game, as proceedings begin to wind down to the final. But, what a tournament it has been, and what a game we have on our hands here, to find out who will face either England or Croatia in the final.

France made easy work of Uruguay in the last round and with Brazil eliminated are now the bookie’s favourites to win the title. Unlike Belgium, France are experienced at this stage and won the title when they hosted the 1998 World Cup.

Like many recent tournaments, France started somewhat slowly and have grown into proceedings. Going up through the gears in the second round, France continued at a high-pace into the quarter-finals and dominated the match against Uruguay. They will meet a tougher foe here though. Naturally when facing a opponents like Hazard and Lukaku the defence will be tested. But it’s in midfield where this game will be won or lost. Paul Pogba and N’Golo Kante will be heavily relied on to control the match and it will be a enthralling battle in the middle of the park. For goals, Antoinne Griezmann and the star of team so far, Kylian Mbappé, will be tough for the Belgium defence to stop. This has the makings to be a classic semi-final.

Belgium’s golden generation is finally reaching its potential. After just sneaking past Japan in the last minute and raising questions that this team would underachieve again, Belgium did away with Brazil and their critics in one fell swoop last week. Martinez was praised for his tactics, as Belgium set up to counter-attack. They did so with style, with Hazard, De Bruyne and Lukaku proving too hot for Brazil to handle.

That win means Belgium should hold no fear here. Brazil were favourites before their elimination and Beglium must now move on to another demanding task. Martinez has told his players to be fearless and so they should be, but they will be without the suspended Thomas Meunier. Perhaps two questions remain over Belgium’s chances. Firstly, Martinez’s tactics. He was praised for his astuteness against Brazil, but a similar approach would likely not work here. Get it wrong and France may prove a brickwall. But get it right and Belgium will be heading into their first World Cup final. Second is the issue of experience. Belgium haven’t been this far and though most of their players have played at the highest club level, they are not experienced at this stage of a World Cup. Thierry Henry’s influence from the coaching staff should help but the players must have nerves of steel here.

Prediction: France to qualify – We can’t wait for this one. Both squads are packed to the brim with quality and there will be key battles all over the pitch. But, with their experience at this level, we think France will edge into the finals.

Place a bet on this at Mr Green

Mr Green are our bookie of the week. To find out all you need to know about Mr Green you can read our Mr Green review. 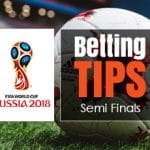