It’s time for another break from the Premier League as we welcome a couple of international fixtures. England will bring their World Cup qualification process to a close with a home match against Slovenia and a trip to Lithuania. 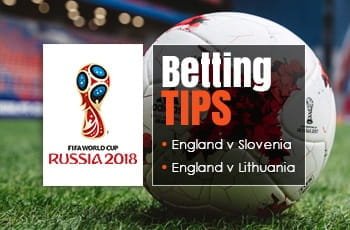 The hard work should already be done and barring a disaster England will qualify as group winners. The Three Lions need just two points from these two games and could seal things off with a win against Slovenia on Thursday.

While England top the group, they haven’t necessarily been convincing and there are still many questions for Gareth Southgate to answer. The last two games, against Malta and then a vital clash with Slovakia, are perfect examples. England never looked in trouble against Malta, though the slowness of their build-up play and lack of cutting edge really showed, with a 3-0 scoreline flattering England somewhat. The next match against second place Slovakia was crucial and England went behind after just five minutes. They started slowly and did improve, eventually winning 2-1 against a tiring Slovakia, but once again, it was hardly convincing.

Nevertheless, the shackles should be off here as England can likely play freely knowing the qualification is almost in the bag. Harry Kane is in unstoppable goal scoring form, as is strike partner Marcus Rashford. Both are surely the first names on the teamsheet, at least for the first match against Slovenia. Kane’s Spurs teammate Deli Alli will miss out though, as he is ruled-out of the game through suspension.

England need just two points from these final two games to ensure qualification. In truth, they will likely still finish top even if they lose this game, but the Three Lions would surely like to confirm automatic qualification on their on terms, in front of their own fans. England are yet to drop points at Wembley in the campaign so it would be a shame to lose that record now.

England are without Phi Jones, who played 90 minutes for Manchester United at the weekend, but has withdrawn from the squad with a minor injury. Harry Kane scored thirteen goals for club and country in September and will be hoping to pick up in October where he left off last month.

Prediction: 2:0 – England can qualify at Wembley in front of their own fans and are unlikely to slip up.

If England win Thursday’s match against Slovenia then the outcome of this one is irrelevant for both teams. England will have already qualified, while Lithuania have no chance of making the play-off stage, as they sit on just five points currently.

Obviously, Southgate would prefer England to win the Slovenia match. Not only will this see his team booking their place in Russia, but it would also offer Southgate the chance to experiment a little with his lineup and formation in this one. We could see some fringe players being given a chance, as England play their last competitive fixture before the World Cup. Either way, England should have the quality to win this one. They are usually a team that play better when the pressure is off, so we should see a comfortable win against a team that has struggled.

Following this one, there will still be plenty of testing friendly fixtures. The FA have already lined up friendlies against Germany, Brazil, and Italy, as England will hopefully begin their preparations for the summer tournament.

Prediction: 0-2 – This should be a comfortable evening for England who will likely already have confirmed qualification.

Paddy Power are our bookie of the week. * All our selections are provided for entertainment only and should only be used for informational purposes. Whilst we use our experience and knowledge to help inform you to make a considered bet, we are not responsible for any losses that may arise from actual results being different than predicted. 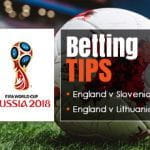