This week, as the Premier League takes a break after a roaring start to the season, we’ll be focusing on the two vital World Cup qualifying fixtures England face over the weekend. 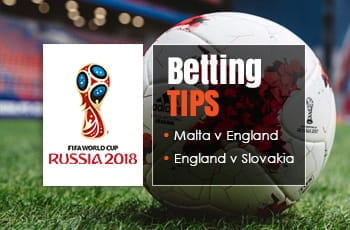 The Three Lions remain unbeaten and currently top Group F but it hasn’t been all plain sailing. In fact, the last fixture back in June against rivals Scotland almost ended in defeat, but for a last gasp Harry Kane equaliser that saved England’s blushes and earned a vital point. The two dropped points could be costly for England however. Slovakia sit just two points behind in second place, while Slovenia are one point behind them in third. Despite their best efforts against England in the previous match, Scotland’s chances of qualifying are distant, but victories in their final two games against Slovakia and Slovenia could see them in with a chance.

Despite the draw in their last match, England are still firm favourites to qualify in first place. But the performances have been adequate rather than impressive. Ten goals scored and just two conceded perhaps flatters to deceive a little. Outside of the group, results in international friendlies have hardly gone England’s way. Defeats against both France and Germany were preceded by a draw against Spain, meaning the victory against Lithuania is England’s only victory in the last five matches. The Lion’s record in qualifiers is formidable however; England are unbeaten in 35 qualifying fixtures since 2009.

Gareth Southgate has named his 28 man squad though there’s one famous face that will be noticeably absent. Wayne Rooney – despite being re-called by Southgate – announced his retirement from English football and will not take part in either fixture. Rooney’s absence not only leaves a void to be filled in the team, but a captain’s armband to be re-issued. Speaking on the issue, Southgate said:

“I won’t rush it with the captaincy; we will spread it through the team for now, so it’s important for others to take responsibility”.

Southgate has praised Rooney, but has also heaped praise on a few less obvious candidates. There are deserved call-ups for Nathaniel Chalobah and Harry Mcguire, who have impressed both at the Under-21 Championships and in the Premier League. Phil Jones has been passed fit from an ankle complaint, while England could miss the creativity of Adam Lallana in midfield, who is out with a thigh injury.

England eased past Malta 2-0 in this fixture back in October last year. The match was Southgate’s first in charge as interim manager and was never likely to pose a challenge, but victory helped to steady the ship at a turbulent time for the England national team.

This fixture should also offer few problems. The pressure is perhaps a little higher, as any slip ups now could be extremely costly. But Malta are the whipping boys of Group F. Six losses from six games, with fifteen goals conceded and just two scored, means Malta sit rock bottom and are already eliminated from the competition.

It’s safe to say that England are big favourites for victory then. In fact, big, big favourites is probably a better way to put it. Malta are a whopping 40/1 to win, while England are just 1/20. It’s a tricky one to sniff out some value then. A correct score prediction is one way, and we can see a repeat scoreline from the last encounter between the teams. Alternatively, Harry Kane will be sensing this match as the perfect opportunity to end his three game goal drought in the Premier League. His stats so far have been great and the goals from Kane are coming, so backing Kane as a first scorer or to score two goals is another possibility.

Prediction: 0:2 – Barring a disaster, this will be a comfortable evening.

This is the crunch match as England take on probably their biggest rivals in the group, Slovakia. Unlike England, Slovakia’s match prior to this is a sterner test. Slovakia will face Slovenia, who sit just one point behind them in the group, in what is a must win fixture for both teams if they want to have a shot at qualification. A draw in that match would give England a cushion, should they beat Malta, while a win for Slovenia would mean England could extend their lead to three points.

The Three Lions were lucky to beat the Slovaks in the away leg. Managed by Sam Allardyce during his short reign, the opening match of the qualifiers was decided only by a 95th minute Adam Lallana goal, after Slovakia had resisted with ten men since the 57th minute. Looking further back, nothing could separate the two teams in the Euro 2016 group encounter, as Slovakia sat back, knowing a draw would take them through in a match then ended 0-0.

Slovakia have form coming into the match, with victory in their last four competitive international fixtures. A win against Slovenia on Friday would mean a two-horse race between these two teams for top place in the group, which would add another dimension to the fixture. As a must win game for both teams, the match is likely to be cagey, with neither team wiling to risk much or to make a mistake. Though this is a match England should win. With Wembley the venue, England should take the impetus and use home support to carry them through. Should they do so, they will be all but assured of automatic qualification. With that in mind, a slim victory for England seems on the cards.

Prediction: 1-0 – A nervy affair for England, but one that they should see through by a narrow margin.

The low value for win bets means we’ll have to get creative here and eke out value somehow by placing a double on our correct score predictions. 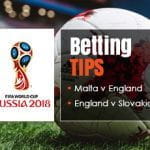