As the Premier League breaks, some of its star players will still have some hard work to do. For the European countries, four places to the 2018 World Cup in Russia remain up for grabs, but they will be fought over by eight teams. 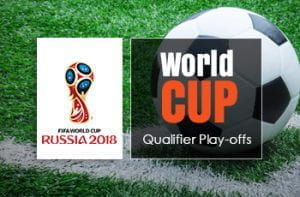 Four teams from Europe will make it through to the World Cup finals in Russia 2018.

Scotland and Wales might have missed out, but Northern Ireland and the Republic of Ireland still have every chance of making it to Russia, as they face Switzerland and Denmark respectively.

This will be Northern Ireland’s first time at a World Cup playoff. The Republic of Ireland are veterans however, with this a record eighth playoff for the Irish. Both teams will be happy they avoided perhaps the strongest team still in at this stage, Italy. The Italians face a very tough game against Sweden, while the other match features Croatia against Greece.

The matches will be played over two-legs with the first two fixtures being played Thursday and Sunday, Sweden vs Italy on Friday and Monday, while Denmark vs Ireland is set for Saturday and Tuesday. The games will kick off at 20:45, except for the second leg of Switzerland vs Northern Ireland, which will start at 18:00.

This will be new ground for both teams, as it’s the first time the two have met in a competitive match. There have been just four previous meetings between the two, with two wins for Northern Ireland, one draw, and one win for Switzerland. The last of these matches was in 2004 though, so this historical record will offer us little idea of what could transpire.

Northern Ireland had a strong finish to the group stage, winning four of their last five home games, losing only to Germany. Michael O’Neill’s men overcame a very strong group to make it to this stage, with their home form key. Germany were the only team to leave Northern Ireland with any points, suggesting the Swiss have a real job on their hands on Thursday.

Switzerland though were perhaps the most unlucky of all the group runner ups. They won nine of their ten qualifying games in group B, with a defeat to Portugal in the last match of the campaign leading the Swiss to miss out on automatic qualification. With the best record of all the teams in the playoff stage, Switzerland will be very hard to beat. Key man Xherdan Shaqiri got a goal and an assist in for Stoke last weekend and if he maintains that form then Switzerland could be dangerous.

Prediction: U 2.5 goals – Northern Ireland’s home record speaks for itself and Switzerland would not see a one goal defeat as too bad of a result in the away leg.

Both these teams are not only experienced in the playoff stage of the competition, but also have a perfect record too. Croatia have been here four times before, winning all four times, while Greece have made it through in the two playoff matches they have played.

Croatia made it through to this stage with six wins, two draws and two defeats. Top scorer Mario Mandžukić has five goals in the competition but their form is not so hot. Croatia missed out on automatic qualification after being overtaken by Iceland, with two defeats and a draw in their last five group games. Croatia might have won a game more than Greece in the group stages, but they lost one more too, and they will be well aware of how difficult Greece are to beat.

Greece have a great goalscorer themselves in Kostas Mitroglou. Mitroglou has six goals to his mame and if he can guide Greece through, they will become the first team to make it to three successive World Cups via the play-offs, having seen off Romania in 2014 and Ukraine in 2010. A late spurt from Greece saw them make it here in what was largely an underwhelming campaign, as they made it through ahead of Bosnia and Herzogovina.

Prediction: Croatia win – Croatia are big favourites in the home leg and should emerge winners.

Perhaps the most enticing fixture for the neutral is the anticipated clash between Sweden and Italy. Both Irish managers expressed satisfaction about not having been drawn against the Italians, who were without doubt the most feared opposition.

Sweden it is then, that will have to deal with Italy. Though the omens are not all bad. Sweden scored more goals than any other team at this stage of the competition, despite being in a tough group featuring the Netherlands and France. With three defeats, they also lost more games than any of the other teams too. With Italy scoring 21 goals of their own in the group stage, Sweden will have to tighten up at the back. The Swedes lost two of their last four matches, including a surprise loss to Bulgaria, followed by a defeat to the Netherlands which meant they qualified only on goal difference.

With seven wins in the group stage, Italy are behind just Switzerland for points earned. Their only defeat came against Spain and was the only time Italy didn’t manage to find the net in a match. Ciro Immobile is in fine form for club and country, with 6 goals in the group stage. Gianluigi Buffon will be in goal, perhaps for the last time, should the Azzurri fail to qualify. The Italians are big favourites though and as long as they keep their focus, they should make it through. Should they fail, they will be the only previous winner of the competition not to feature in Russia.

Prediction: Italy Draw no bet – This will by no means be an easy task, but Italy should be too strong for Sweden.

Another interesting one on paper, Irish fans are beginning to realise the size of the job awaiting them. Initially pleased at avoiding Italy, Denmark are perhaps the most in-form team in the playoffs.

Denmark lost one more game than Ireland, but also won one more too. The Danes started the campaign with two defeats in their first three games, but quickly turned it around from there. An impressive 4-0 win against eventual group winners Poland was followed by two wins and a draw in their last three games. Their form is strong then and in Christian Eriksen, the Danes have perhaps the finest player playing at this stage. Eriksen has eight goals in the group stages and is without doubt the danger man.

Another team to have lost just once in the competition, Ireland managed to see off neighbours Wales to make it here. They did win just five though, drawing four of their other games. This steady form has been key to their qualification and Ireland make few mistakes. A single defeat to group winners Serbia was the only time Ireland slipped up and they conceded just six goals compared to Denmark’s eight. Ireland have been here seven times before, though their record isn’t great; they’ve won three and lost four times.

Prediction: U 2.5 goals – Denmark can be a high-scoring team, but Ireland will look to contain them and conceded more than two goals just once in qualifying.

Combi bet of the day: Our pick*

Betway are our bookie of the week. You can get the above selections and many more bets at Betway. 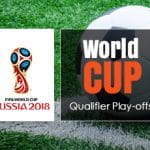